CNN’s John Berman called into the morning show he co-anchors, “New Day,” on Thursday as intense flooding in New York prevented him from getting to the network’s Manhattan studio.

“Let me tell people where I am. I am north of New York City in Westchester County. I’m really only about two miles north of the city. I’ve been trying to get to work for the last several hours and it’s impossible,” he said, using his phone camera to show a number of parked and seemingly abandoned cars on the road.

The National Weather Service issued the first-ever Flash Flood Emergency for New York City Wednesday night as the remnants of Hurricane Ida unleashed massive amounts of water on the area. Central Park saw the greatest amount of rainfall ever to fall in a single hour. 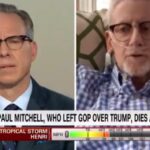 “There are no drivers,” Berman said as he showcased at least a dozen parked cars. “The drivers are long gone. These cars have just been abandoned and here’s the thing that’s truly amazing about this, if people can see this and get a conception of what I’m talking about here: I’m walking southbound. This is a southbound lane that I’m on. All of these cars are pointed north or pointed nowhere. I guess at some point, they got off the road they were supposed to be on and just thought they could get on this northbound lane going the wrong way and they gave up and they just abandoned ship.”

“New Day” spent Wednesday morning broadcasting from Manhattan’s Times Square to showcase the fallout from the storm. Watch Berman below, via CNN.