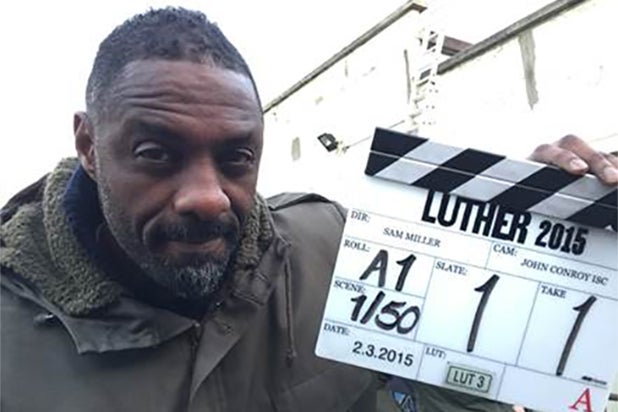 Idris Elba is back — no, not as James Bond but rather for his regular lead role in “Luther.”

BBC America announced Thursday that Elba will return as tormented London police detective, John Luther, for a three-hour movie special of the gritty series to air Dec. 17 at 9 p.m.

Elba, who won the Golden Globe for Best Actor in 2012 for the role, has also starred in “Mandela: Long Walk to Freedom,” “American Gangster,” “Takers,” “Thor,” “Prometheus,” “Pacific Rim,” “Avengers: Age of Ultron,” and “Beasts of No Nation.”

The “Luther” movie special will mark an epiphany for the troubled lead character, according to BBC America.

His chance for a normal life is thwarted when he’s drawn into a case involving a cannibalistic serial killer who “delivers a devastating blow that not only pulls him out of seclusion but pushes him closer to the edge than he’s ever been,” according to the network.

Life has not been easy for Luther — he lost his wife to a brutal murderer, his colleagues turned on him in a witch hunt, his friend and loyal sergeant died in his arms after getting caught in a crossfire. And then he tried  to forge a happy ending with Alice Morgan (Ruth Wilson), a beautiful and smart serial killer, with disastrous  results.

Along with recently being touted to take over from Daniel Craig to become the first black Bond, Elba, 43, will next be seen in “Star Trek Beyond” and “Zootopia.” He also has voice roles in “Finding Dory” and “The Jungle Book.”

Nelson Mandela's life has inspired the world and has been the basis for many memorable performances and films.
View In Gallery