Instagram’s push to curb online bullying took another step on Monday, with the app revealing a new feature that’ll allow users to hide comments from trolls without having to block them entirely — a crucial option, the company said, because teens are typically hesitant to completely block bullies.

“We wanted to create a feature that allows people to control their Instagram experience, without notifying someone who may be targeting them,” Instagram head Adam Mosseri said in a blog post.

The new feature, dubbed “Restrict,” doesn’t make it obvious to a user they’ve been restricted, unlike being blocked. The restricted user will still see all posts from the person that put them on restriction, but if they comment on that person’s pictures or videos, the comment will only be visible to them until they’re approved. Each comment made by the restricted user is flagged for approval, allowing the person that put them on restriction to decide whether all of their followers can see the comment. You don’t even need to read the comments if you don’t feel like it; Instagram will hide the comments behind a “sensitivity screen,” according to Time, the first outlet to report the new feature.

If the comment isn’t approved by the Instagram addressee, it’ll linger in a state of digital purgatory — only able to be seen by the initial commenter. 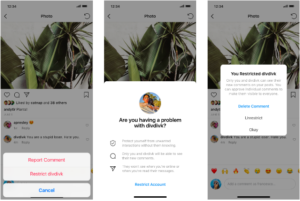 Restricted users also will not be able to see when the Instagram account holder is online or when they’ve read their direct messages.

“We’ve heard from young people in our community that they’re reluctant to block, unfollow, or report their bully because it could escalate the situation, especially if they interact with their bully in real life,” Mosseri said. “Some of these actions also make it difficult for a target to keep track of their bully’s behavior.”

Also Read: How Doing Things Media Laughed It Up to 30 Million Instagram Followers and a TV Show in 2 Years

The feature will enter testing and rollout later this year, according to a person with knowledge of the situation.

As The New York Times recently reported, Instagram has had a tricky time defining what bullying actually is, but the Facebook-owned company has taken several steps in the last year to combat it, including developing artificial intelligence tools to label pictures where it may be an issue.