AMC has greenlit an TV series adaptation of “Interview with the Vampire,” based on Anne Rice’s popular novels.

The series will be available on both AMC and AMC+.

“Interview With the Vampire” was previously adapted into a 1994 movie starring Tom Cruise and Brad Pitt. 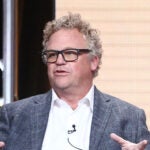 “The challenge of adapting for television the groundbreaking and immensely compelling work of Anne Rice is both intimidating and exhilarating,” Johnson said. “Having previously produced films from such singular works, I recognize both the responsibility and the obligation we owe the material. I strongly believe that with AMC and Rolin Jones we are equipped to meet this challenge and to thrill and entertain both the loyal Anne Rice fan and the viewer who is just now discovering her work.”

“In 1973, a grieving mother and extraordinary writer began what would become the finest Vampire novel ever written (all respects to Mr. Stoker),” Jones said. “Nearly 50 years later we know what’s expected of us. We know how much this book and the ones that follow mean to their massive fan base. We feel you over our shoulders as we tend the Savage Garden. Louis and Lestat are coming out of hiding and we can’t wait to re-unite them with you.”