That’s the top of a full-page advertisement taken out in Friday’s Los Angeles Times by the producers of the movie.

The battle over "Iron Cross" goes on, though I swear I do not know to what end. Earlier this week the producers of the still-unreleased film sued Variety for having run a negative review of the film after allegedly luring the producers into buying $400,000 worth of ads with promises of Oscar nominations and a distributor. (See: Variety Sued Over ‘Iron Cross'; Campaign ‘Ruined by Bad Review’)

So now I guess they’re buying more ads to draw attention to a movie … that still has no distribution? (Come to think of it, I’d better get our ad sales department on it …)

Honestly, not sure what this is all about: a grudge match, a question of pride. 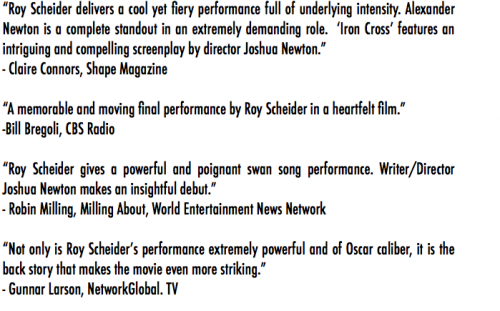 Perhaps they’re hoping to convince a distributor that the attention will win over the box office.

The ad whips up some positive reviews, coming from the likes of Shape Magazine, Bill Harris in Hollywood and the never-before-heard-of NetworkGlobal TV.

Beneath the series of blurbs is noted, "The unreleased film everyone is talking about."

Maybe it’ll work. Or maybe they’ll get some money from Variety.

Either way, it’s the most entertaining story currently in town.