Ivory Hecker, a reporter at Fox 26 Houston, was fired by the station after her on-air revelation Monday that she would be releasing “behind the scenes” recordings of her employer to Project Veritas.

Earlier Tuesday, she was suspended, but shortly thereafter she told the Daily Beast she’d been fired. A representative for Fox 26 Houston confirmed to TheWrap that what she’d said was accurate. They also issued the following statement: “Fox 26 adheres to the highest editorial standards of accuracy and impartiality. This incident involves nothing more than a disgruntled former employee seeking publicity by promoting a false narrative produced through selective editing and misrepresentation.”

On Monday evening, Hecker announced during a live shot that she believed her bosses were “muzzling” her and had provided recordings to the right-wing activist group. 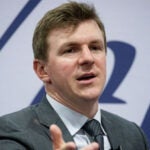 “I want to let you the viewers know that Fox Corp. has been muzzling me to keep certain information from you, the viewers and from what I’m gathering, I am not the only reporter being subjected to this,” she declared while she was supposed to be covering a recent heat wave in Texas and the associated power outages.

She went on, “I am going to be releasing some recordings about what goes on behind the scenes at Fox because it applies to you, the viewers. I found a non-profit journalism group called Project Veritas that is going to help put that out tomorrow, so tune in then.”

The “behind the scenes” video Hecker believes will prove her “muzzling” has not yet been uploaded to the Project Veritas YouTube.