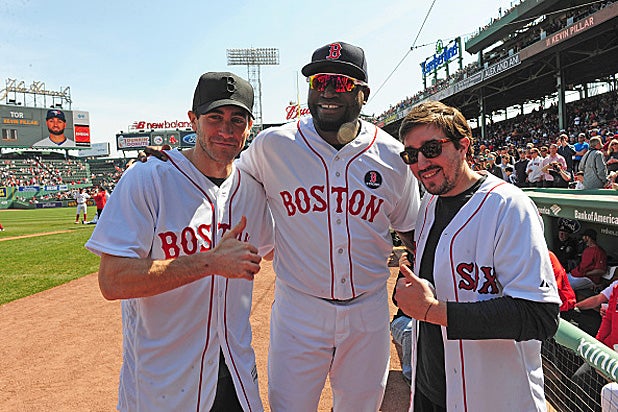 Jake Gyllenhaal proved he has heart, soul and a good arm on Monday when he joined Boston bombing survivor Jeff Bauman to throw out the first pitch at a very special Red Sox game.

The actor and the hero, who had both his legs blown off in the 2013 blast near the finish line of the historic race, took to the Fenway Park mound before the Patriots’ Day morning ballgame, which is a tradition on Marathon Monday.

The pair wore their own customized Sox jerseys for the occasion, with Gyllenhaal donning number 34 to honor soon-to-be retiring star David Ortiz (pictured above, middle). In the aftermath of the bombing, which killed  killed three people and injured an estimated 264 others, Ortiz made passionated and F-bomb-laden speech, telling Red Sox fans: “This is our f–cking city, and nobody’s going to dictate our freedom. Stay strong.”

Gyllenhaal will play Bauman in the upcoming Lionsgate drama, “Stronger,” which is being directed by David Gordon Green. Bauman was cheering for his girlfriend at the finish line on April 15, 2013, and lost both of his legs in the tragic terrorist attack, though he helped identify Tamerlan Tsarnaev as soon as he emerged from surgery. He subsequently wrote a book with Bret Witter that chronicles his recovery and serves as the basis of the film.

In 2014, Bauman welcomed a daughter with his now-wife, Erin Hurley, and baby Nora was carried onto the field Monday by Gyllenhaal, as he prepared to throw out the prestigious first pitch with her dad.

Jeff Bauman and Jake Gyllenhaal having a pregame chat with @davidortiz! pic.twitter.com/Q2PbpcLejp