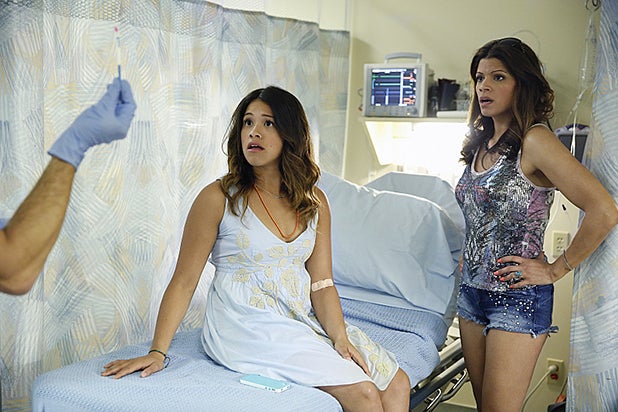 The premise behind “Jane the Virgin” is rather silly.

A young and chaste-by-choice woman becomes pregnant when a gynecologist mistakenly inseminates her. Suddenly, Jane’s whole world is turned upside down as she tries to figure out what to do next on the telenovela-inspired dramatic comedy, which debuts Monday on The CW.

But thanks to star Gina Rodriguez, who makes the lead character believable and likable, the journey to Jane’s choice and the inevitable consequences that follow make “Jane the Virgin” highly entertaining and compelling television. It is also arguably one of the best new offerings this season.

Rodriguez (“Filly Brown”) is a revelation as she draws you in with an earthy charm similar to Rachel McAdams. In the hands of any other actress, Jane would seem stunted and stale. But Rodriguez makes us love her with every smile, tear and deep breath.

Her Jane isn’t a prude. She’s a woman who has chosen not to have sex because Jane’s mother Xiomara (Andrea Navedo, “Guiding Light”) had her when she was 16. Jane also wants to be a teacher and a writer someday and she wants to make her pious abuela Alba (a scene-stealing Ivonne Coll) proud.

She says no to sex even though she really wants to consummate her two-year relationship with her adoring boyfriend Michael (Brett Dier), an ambitious police detective. Sweet and loving, the twenty-something pair encourage and support each other’s professional aspirations and work hard not to succumb to their baser needs until marriage.

Also read: ‘The Flash’ Gives The CW Its Biggest Premiere in Five Years

All of this flies in their faces when Jane’s routine gynecological visit turns into something straight out of a soap opera and she becomes pregnant, not with her boyfriend’s baby, but that of her handsome and unhappily married boss Raphael (Justin Baldoni).

Complicating matters even more, Jane used to have a crush on Raphael back in the day and he’s a cancer survivor, who can no longer have kids. So the baby inside her is his only biological chance at fatherhood. Talk about drama.

While this sounds like a farcical storyline out of one of the telenovelas Jane dutifully watches with her mother and grandmother, the writers behind “Jane the Virgin” not only acknowledge the unlikelihood of so many twists and coincidences but they revel in them — and this humorous approach works. Disbelief is wittingly suspended because Jane’s world is histrionic but she’s not and it’s her normalcy that gives the series plausibility and heart.

Xiomara also conceals the identity of Jane’s father, which further compels Jane to be forthright and pragmatic in ways her mother hasn’t been. But Alba, who only speaks Spanish, isn’t the saint Jane thinks she is.

The interactions between these three generations of Latino women saddled with guilt, secrets and responsibility enriches “Jane the Virgin” and takes it beyond its genre. The love and occasional animosity between them is especially relatable. As long as the writers and producers lean more on this familial bond and less on twisty cliffhangers, this show will become the hit it deserves to be.

Also read: ‘Jane the Virgin’ Boss Intends to ‘Embrace all the Tropes’ of the Telenovela

Although the comparisons to “Ugly Betty” are inevitable, the latter didn’t quite delve into the relationships between grandmothers, mothers and daughters like this. In the first episode, lines blur and Alba, Xiomara and Jane become interchangeable in such a way that Jane even mothers Alba at one point.

Yup, there’s a lot more to “Jane the Virgin” than its soapy surface and you will cry just as much as you laugh  — and love every minute of it.