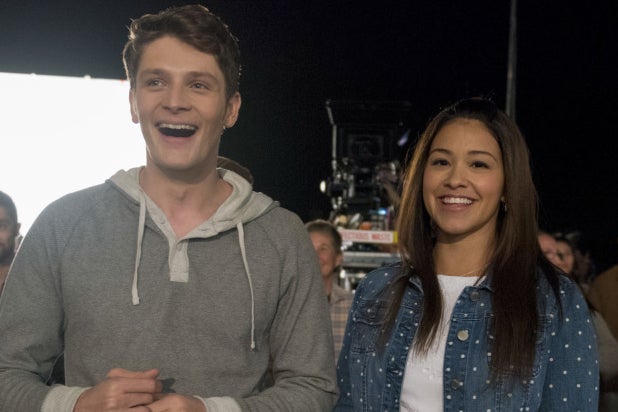 (Spoiler alert: Do not read on if you have not watched Monday’s episode of “Jane the Virgin,” “Chapter Fifty-Four.”)

Well, it finally happened: The moment plenty of “Jane the Virgin” fans have been dreading since an ominous voice-over from the narrator way back in Season 1.

On Monday night, in the tenth episode of Season 3 of the Gina Rodriguez-led CW dramedy, Jane’s husband Michael (Brett Dier) collapsed and died during his LSAT exam.

It was a shocking moment, and yet one that had been foretold in Season 1, when the narrator (Anthony Mendez) told us that Michael would never stop loving Jane: “For as long as Michael lived, until he drew his very last breath, he never did.”

“Jane” showrunner Jennie Urman took to Tumblr to share her thoughts and reasonings behind Michael’s death.

“It was also a decision made very early on, when I thought about our story as a whole,” she said, after praising Dier’s performance. “And even in season one, I knew it would be a hard thing to actually do, which is why there was a line (which many of you noticed) about how Michael would never stop loving Jane… Honestly, I put that line into the script at the last minute to hold our feet to the fire, to make sure we went through with it. Because even back then, the writers could all see the magic of Jane and Michael together.”

Urman also revealed that Dier’s performance of the character changed the timeline of Michael’s death – he was originally supposed to die much sooner – and explained why the show did a three-year time jump at the end of the episode.

Also Read: 'Jane the Virgin' Tackles Abortion Debate: 'There Was No Other Choice'

“We’ll be flashing back to those three years and filling in gaps, but mining emotions realistically is something we work hard on and we knew the immediate pain of that loss would overwhelm our storytelling,” she said. “After talking to grief counselors, this felt like the right time to reenter Jane’s journey. She’ll always feel Michael’s absence (and trust me, we will too), but it opens up our storytelling in new and exciting ways, while allowing for the light and bright Jane world that we love to write.”