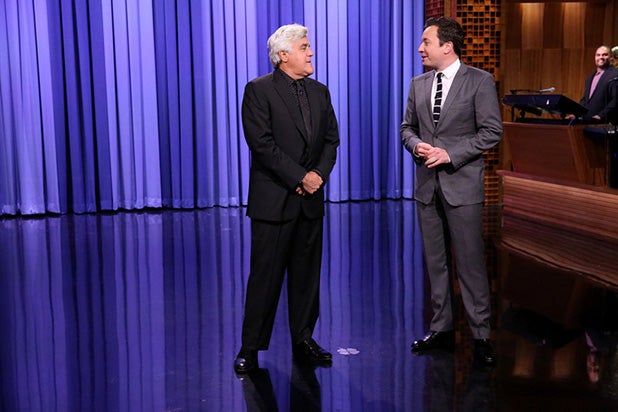 Another week, another win for Fallon.

“The Tonight Show” once-again topped the late-night ratings week versus its CBS and ABC time-period competition.

Jimmy Fallon bested runner-up Stephen Colbert in total viewers for the week of Oct. 5-9 by a 22 percent margin, with an average of 3.524 million versus 2.893 million. That achievement tied the NBC show’s biggest advantage to-date over Colbert’s “Late Show”: Across the prior three weeks, Fallon has led by 22 percent, 11 percent, and 19 percent, chronologically.

“The Late Show With Stephen Colbert” enjoyed a modest 5 percent total viewer bump versus the same week last year. While not a huge number, it was the only late-night show that was up from 2014. “The Late Show” was up 20 percent among adults 18-49, up 14 percent in the 25-54 age range and enjoyed a 67 percent leap in the 18-34 demo. In that last demo, Colbert and Fallon were all knotted up.