Johnny Depp returned to the stand Thursday to resume cross-examination by ex-wife Amber Heard’s attorneys, who focused on the “Pirates” actor’s drug use and text messages he sent referring to Heard as an “idiot cow,” “worthless hooker,” and “filthy whore.”

Heard’s lawyer J. Benjamin Rottenborn showed texts from a 2013 exchange between Depp and actor Paul Bettany. Depp told the court he and Bettany were friends and they did cocaine together. 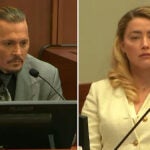 A 2014 flight from Boston to Los Angeles was also mentioned several times. Depp said the night before the flight he and Heard had an argument about a movie she was shooting with James Franco. (The two appeared together in 2015’s “The Adderall Diaries.”) Depp said he thought Heard was cheating with Franco. After the flight, Depp wrote in a text that he was so on edge, he hadn’t eaten in two days, but drank half a bottle of whiskey, a thousand red bull and vodkas, popped pills and had two bottles of champagne on the plane.

The day after the flight from Boston to LA, Depp sent a text to Heard apologizing for his behavior, “Once again, I find myself in a place of shame and regret. Of course, I am sorry. I really don’t know why or what happened but I will never do it again.”

Depp admitted neither could live like that. “I love you and feel so bad for letting you down,” wrote Depp. The two were married in 2015.

Rottenborn also asked the actor if he ever took drugs with musician Marilyn Manson. Depp said, “I once gave Marilyn Manson a pill so that he would stop talking so much.” Rottenborn also showed a picture from March 2013 of a table with wine, whiskey, four lines of cocaine and a box with a skull and crossbones with “property of J.D.” written on top. The attorney said at the time Depp had fallen off the wagon and asked the actor if he would sometimes drink whiskey in the morning. Depp responded, “I mean every hour is happy hour.”

Heard is also expected to take the stand during the case.