For a movie where a man saves himself from falling by stuffing fingers in another man’s nostrils, “Journey to the West: Conquering the Demons” is remarkably sophisticated. Writer-director Stephen Chow, whose “Kung Fu Hustle” was one of the past decade’s best films, returns from a five-year hiatus with an epic story of spiritual enlightenment, framed by the slapstick and sentimentality that have become hallmarks of his febrile creativity.

A virtual masterpiece of astutely-observed behaviors, combined with intimate knowledge of genre conventions and what the film’s characters would call a little special “something,” “Journey to the West” is an incredibly fun, powerfully meaningful and entirely unique moviegoing experience.

Zhang Wen (“The Guillotines”) plays Xuan Zang, a mop-topped monk in 16th century China who aspires to be a demon hunter. When a village is besieged by a fishing demon, Xuan intercedes and attempt to “coax the goodness out of him,” but his method proves less effective than that of Miss Duan (Qi Shu), who pummels the creature into submission and sends Xuan off in search of “enlightenment.”

After an encounter with a pig demon reunites the pair, Duan confesses she’s attracted to his selflessness – which doesn’t interest Xuan, who prefers a “higher love” to the base impulses of earthbound romance. Enlisted by his master (Sihan Cheng) to find the Monkey King Sun Wukong (Bo Huang), Xuan soon faces his greatest challenge, as he’s forced make an impossible choice – embrace the more aggressive fighting styles of his fellow demon hunters, ensure the safety of Duan, or ignore the physical world and achieve true enlightenment. 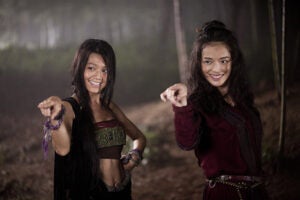 Although mo lei tau is a genre unto itself in Hong Kong cinema, it’s tough to describe Chow’s singular filmmaking style to Westerners because it combines so many seemingly contradictory elements – irreverent humor, genre boilerplate, cultural traditions, and complete non sequiturs. What Chow brings to this potpourri of ideas and behaviors is an incredibly fluidity, and an intense, almost undeniable emotional impact; like when he handles a little girl whose dad pretends to drown, cheers her up, and finally falls victim to a fishing demon before her eyes, Chow switches effortlessly between horror, comedy and tragedy, making each of those sensations as powerful as the others.

On the surface, describing such tonal schizophrenia admittedly makes “Journey to the West” seem like an uneven mess, but like “Kung Fu Hustle” and “Shaolin Soccer,” the filmmaker’s latest unfolds like a symphony, full of minor notes and grand movements that are not just compatible but fully cohesive.

Moreover, where other filmmakers often seem to be working against themselves to create compelling drama without sacrificing audience comfort, Chow makes deliberate choices that subvert expectations and give his films a bittersweet resonance. In “Journey,” for example, the village’s battle with the fishing demon ends in multiple deaths, including those of children; notwithstanding the sequence’s condensed homage to the plot of “Jaws,” Chow doesn’t write his way out of such tragedies, communicating the emotional weight of the survivors’ losses. Additionally, their passing punctuates Xuan’s initial failures as a demon hunter, reinforces his larger journey and understatedly introduce the movie’s overarching themes, which suggest that suffering is a necessary catalyst for spiritual epiphanies.

Even without its underlying profundity, however, Chow’s latest is an irresistible roller coaster ride, a wild adventure whose eclectic ensemble makes it as ridiculous as it is meaningful. Xuan’s nobility is as goofy as it is attractive, and his penchant for underestimating opponents supplies the action sequences with both tension and humor, while Duan’s persistence in courting him simultaneously exposes her strengths as a fighter and shortcomings as a seductress. And in general, his ability to undercut the self-seriousness or “importance” of his characters with odd quirks – like the martial arts master whose deadly skill is disguised by a hilariously undersized foot – deconstructs perceptions of authority and humanizes even the most fantastical concepts.

Ultimately, Chow’s latest is a bona fide masterpiece, the triumphant end result of a virtuoso working at the absolute peak of his talents. As a blend of dramatic textures that effortlessly taps into the audience’s emotional core or just a challenging mishmash that tests their emotional flexibility, “Journey to the West” is the most unique and satisfying crowd-pleaser of 2013, precisely because it can please so many different crowds.