Eli Roth is a much smarter filmmaker than many give him credit for being, but “The Green Inferno” doesn’t do a whole lot to answer his critics.

His long-overdue fourth directorial effort is a serviceable follow-up to reintroduce audiences to his idiosyncratic brand of horror and abundant gore (cannibalism!), but it fails to either offend or exhilarate, instead chronicling the misadventures of a group of student activists with more technical acuity than singularity.

Lorenza Izzo (“Aftershock”) plays Justine, a freshman at Columbia University who finds herself drawn to an activist group by its charismatic leader Alejandro (Ariel Levy).

Despite Alejandro’s standoffish behavior, Justine persists in participating and signs up for a trip into the Amazon to protest land developers who are decimating native populations. 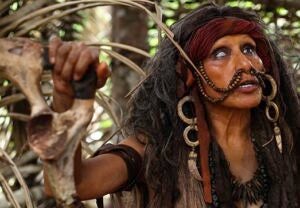 When their protest meets with mixed success, they quickly turn around and head back to civilization, but their plane crashes, stranding them in the jungle. After a cannibalistic tribe intercepts the survivors and imprisons them in their village, Justine and her friends discover that the indigenous world offers even more sinister perils than the civilized one they’re trying to protect it from.

Although Roth astutely takes down the superficial, bandwagonning activism of college students taking their first steps into the real world, the foundation of his story cleverly turns the most basic concept of “classic” cannibal movies like “Cannibal Holocaust” and “Cannibal Ferox” upside down.

Typically, these films’ designated victims are white, privileged and indifferent — or even hostile — to the perceived barbarism of their native counterparts. But here, he courts the audience’s sympathies by making them earnest and well-meaning, even if they’re hopelessly misguided. That their eventual downfall comes at the hands of the people they hoped to protect is a rich irony that Roth handles without putting too fine a point on it.

At the same time, he manages to make many of those would-be protagonists incredibly unlikeable, perhaps making it easier for audiences to watch them be served as the tribe’s supper. Played with convincing terror by Izzo, Justine is first manipulated by Alejandro to help the group gain publicity (she’s the daughter of a U.N. lawyer), and later designated by the natives for an especially horrifying ritual, which girds our sympathies and (perhaps appropriately) outrages us at the cannibals’ savagery.

But Alejandro is, to Roth’s credit as well as Levy’s, a truly despicable character, sanctimonious and condescending as Justine tries in earnest to join their organization, and later, duplicitous, self-serving and sociopathic as the crash survivors band together for survival.

The film’s gore, which features numerous graphic disembowelments and unnecessary amputations, will certainly test viewers’ constitutions, but it’s here where Roth gleefully celebrates his influences, employing iconic practical effects gurus to make the blood and body parts as yucky and realistic as possible.

It’s this juxtaposition between in-your-face carnage and beneath-the-surface commentary that distinguishes Roth from his counterparts, most of whom are content to provide the audience with a visceral experience and not bother with a larger social context.

And even though it’s executed unevenly — sometimes subtle, others obvious — that more serious consideration of genre conventions and thematic complexities enhances his work and underscores its depressing absence elsewhere within horror.

But even with much to admire about the film’s most basic ideas, its overall execution lacks the certain spark or quality that makes the difference between great horror films and, say, a good but forgettable one.

Roth treks out to the jungle, stages a virtuoso plane crash, and chops some white people’s bodies up, but the end result is far less devastating than one might expect, though if you can get through the cannibal sequences without averting your eyes, you’ve got a stronger stomach than me.

Ultimately, “The Green Inferno” resuscitates cannibal movies in a way that they possibly need to be — even if only as an alternative to ghost stories and slasher films — but doesn’t make a lasting impression. And when you’re serving up as unique and decidedly exotic a feast as Roth is here, it comes as a letdown to leave the audience without a strong taste in its mouth, good or bad.