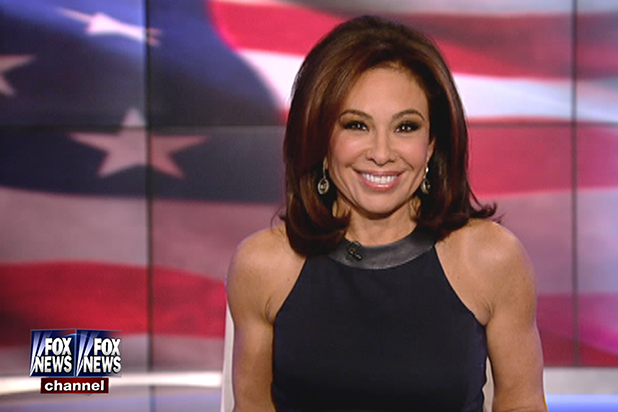 Fox News host Jeanine Pirro returned to air Saturday night without mentioning the reason for the two-week absence of her show, “Justice With Judge Jeanine.” However, her first guest for the evening, Rudy Giuliani, did allude to it. Sort of.

“I’m glad you’re back,” he said, shaking her hand. “We need, at this time that our country is in trouble, we need your commonsense voice.”

Pirro’s show hasn’t aired since March 9, when she questioned on-air Rep. Ilhan Omar’s loyalty to America because she is a Muslim.

“Think about it,” Pirro said. “Omar wears a hijab, which according to the Quran, 33:59, tells women to cover so they won’t get molested. Is her adherence to this Islamic doctrine indicative of her adherence to Sharia law, which is antithetical to the U.S. Constitution?”

The comment sparked a bipartisan cascade of outrage, including from Fox News personalities, and the network condemned her.

“We strongly condemn Jeanine Pirro’s comments about Rep. Ilhan Omar. They do not reflect those of the network and we have addressed the matter with her directly,” a network rep said at the time. Although disciplinary action was not confirmed, “Justice With Judge Jeanine” was not broadcast for two weeks.

Pirro was slated to appear Friday night on “The Sean Hannity Show,” but cancelled due to what Hannity called a “serious family emergency.” However, she didn’t mention the family emergency in her opening comments Saturday.

Congresswoman Omar — who was elected to the Minnesota House of Representatives in 2016 on the Democratic-Farmer-Labor Party line, making her the first Somali American elected to legislative office in the United States — praised Fox News for publicly rebuking Pirro’s comments.

“No one’s commitment to our constitution should be questioned because of their faith or country of birth” she tweeted.

The Council on American-Islamic Relations called on all advertisers to drop Fox News until the network fired Pirro and Tucker Carlson due to comments by both hosts that the civil rights group called “Islamophobic.”

At the end of Saturday’s broadcast, Pirro said, “I want to thank each of you for watching me tonight. I love my loyal Fox News Channel viewers, and I appreciate all of you for joining me.”