“Justice League” has dropped in movie theaters but its fans can’t seem to drop the weirdness going on with Superman’s upper lip caused by the CGI removal of Henry Cavill’s mustache.

Even Seth Rogen has weighed and tweeted, “This is f–king real?!”

“Justice League” underwent reshoots this summer, which ended up taking longer than Warner Bros. anticipated. Cavill was faced with a conflict as a result: he had grown a mustache for “Mission: Impossible 6,” but he obviously couldn’t have a mustache while playing Superman/Clark Kent.

Warner Bros. dealt with Cavill’s mustache in post-production, attempting to use CGI to give Superman his normal clean-shaven look. And while, yes, you can’t see his mustache, Cavill’s upper lip doesn’t come through the process unscathed. In more than one scene in “Justice League” it’s very obvious that heavy CGI work was done on his mouth.

You can fool some of the people some of the time, but you can never fool fanboys! Here are some more hilarious reactions. 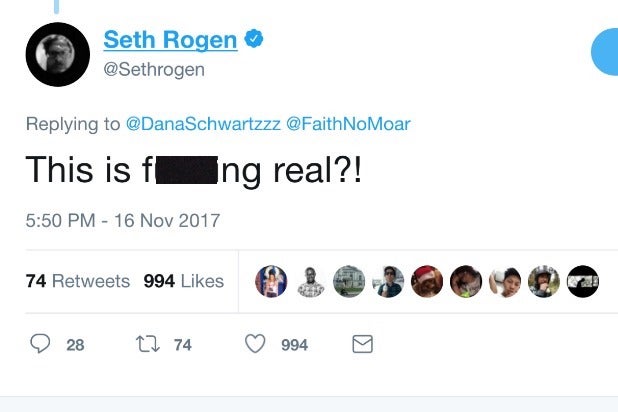 Reminder that Marvel did this in 2015. #superman #mustache #cgi pic.twitter.com/Z77juPIj7Z

Henry Cavill's mustache could not be contained by mere human CGI pic.twitter.com/TnxdpbeNVT

Honestly they should have just let Henry Cavill keep the mustache. I mean look at him. pic.twitter.com/DejTC16uNu

No idea what the hell you guys are bitching about the CGI erasing Henry Cavill's mustache was seamless. pic.twitter.com/sEdPQf91lE

I for one do not agree with WB’s decision to replace Henry Cavill’s mustache with Christopher Plummer pic.twitter.com/YnVY8T5ueB

From a Batman News commenter… 😂

How to remove a Superman mustache the WB way:

1. Open Photoshop.
2. Click the clone stamp tool.
3. Brush off the stache for about 2 minutes by cloning other parts of the face
4. Do it frame by frame.
And you're done. pic.twitter.com/TJmI3yJuzm