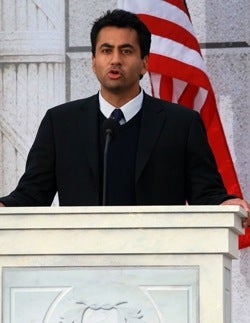 Kal Penn should have gotten out of D.C. while the getting was good.

The former "Harold and Kumar" and "House" star — who left his successful Hollywood career last year to become associate director of public engagement for the Obama Administration — was robbed at gunpoint early Tuesday morning while walking in the nation’s capitol, his publicist has confirmed.

"The actor is fine," an individual close to Penn within the White House told TheWrap.

TMZ first reported the story, saying Penn told police that a man armed with a gun approached him around 1:20 a.m. and stole his wallet and other personal effects.

Penn immediately reported the incident to the authorities, who are currently investigating the matter.

While, confirming the indicident, D.C. Metro Public Affairs spokesperson told TheWrap that "law enforcement would be making no further comment on this investigation until it is concluded."

Ironically, the actor was said to be returning to Hollywood for another "Harold and Kumar" movie but, as TheWrap reported, as of a couple weeks ago he still hadn’t told his bosses at the White House.

The individual close to Penn told TheWrap on Tuesday that he was still working at the White House.