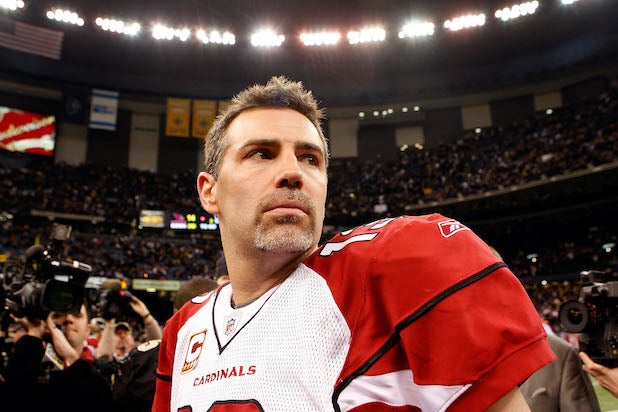 Lionsgate has greenlit and is fast-tracking a biopic based on the life of NFL Hall of Fame quarterback and Super Bowl MVP Kurt Warner from the writer of “Friday Night Lights” and the directors, writers and production banner behind the faith-based hit “I Can Only Imagine.”

“American Underdog: The Kurt Warner Story” will be the next film from the Erwin Brothers, Jon Erwin and Andrew Erwin, and their Kingdom Story Company banner. The movie will be fast-tracked for production by Lionsgate and slated for wide release on December 18, 2020. Casting is underway now for the film, including for leads Kurt Warner and his wife Brenda Warner.

“American Underdog” will follow the life story of Warner from a young man stocking shelves at a supermarket and undrafted free agent in the NFL to how he became a two-time NFL MVP quarterback for the St. Louis Rams, Arizona Cardinals and New York Giants.

Kingdom Story acquired Warner’s life rights, and the screenplay by the Erwin Brothers and David Aaron Cohen is based on interviews with Warner as well as his memoir, “All Things Possible: My Story Of Faith, Football and the First Miracle Season.”

The Erwin Brothers will direct and produce “American Underdog” for Kingdom alongside their partner Kevin Downes. Warner and Brenda Warner will also co-produce.

“For the longest time I dreamed of having a story similar to many of my heroes, but as my journey began to stray further and further from that path, I wondered why me? As I look back on that journey now I believe I am finally able to answer that question,” Warner said in a statement. “I believe God has taken me on this journey to inspire others that no matter what life may throw at you, your dreams can still come true. I am extremely excited to be working with Lionsgate and the Erwin Bros to bring this story to life on the big screen, in hopes of encouraging all who see it to never stop believing in themselves and what God can do with them!”

“Kurt lived the ultimate underdog story, it’s one of perseverance, dedication and tenacity, but also one of the powers behind the scenes – his family and his faith – that led him to victory. His story is bigger than football and inspiring to dreamers everywhere, and we’re excited to be getting started,” the Erwin brothers said in a joint statement.

“American Underdog: The Kurt Warner Story” is the third film Lionsgate has greenlit from Kingdom Story Company in the last year as part of a partnership to provide event-level entertainment for audiences of faith. The studio is also set to release “I Still Believe” on March 13, a biopic about Christian music star Jeremy Camp.

The Erwin Brothers previously collaborated with Lionsgate and sister company Roadside Attractions on “I Can Only Imagine,” which took in $83 million domestically on a budget of $7 million and became fifth-highest-grossing musical biopic of all time.