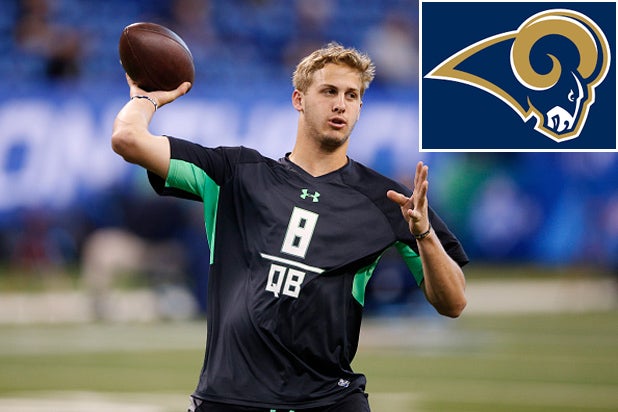 With the No. 1 pick in the 2016 NFL draft, the Los Angeles Rams have picked Cal quarterback Jared Goff.

The announcement was made by NFL Commissioner Roger Goodell from the Auditorium Theatre in Chicago Thursday evening and aired live on ESPN at 5 p.m. PT / 8 p.m. ET.

Goff didn’t know for sure that he had been picked until the phone call from coach Jeff Fisher came through. But he told ESPN that “it was well worth the wait. It was an unbelievable moment and a once in a lifetime experience,” he said. “I can’t really put it into words right now. But I am very happy, very excited to get on.”

In a heartfelt gesture to ESPN senior NFL analyst Chris Mortensen, who is currently battling cancer, Goff and reporter Suzy Kolber both said, “We miss you Mort, stay strong.”

As for Wentz, he was picked second by the Philadelphia Eagles, a move that was also predicted by most draft experts.

Goff and Wentz both visited Los Angeles last week to meet with coaches and team management, as officials wanted to meet both quarterbacks before making a decision.

This marks the third time that Fisher has picked a quarterback in the first round of the draft. Previously, when he was the coach of the Tennessee Titans/Houston Oilers, he chose Vince Young and Steve McNair.

The Rams, who acquired the No. 1 overall selection from the Titans in a blockbuster trade earlier in the month, had been leaning toward using the pick on Goff, according to ESPN’s Adam Schefter, but wanted to meet with both QBs and debate the decision before making a choice.

Back in downtown Los Angeles Thursday night, hundreds of Rams fans gathered at L.A. Live for a rally celebrating the team’s first draft since returning to the City of Angels.

The Rams will play at the Los Angeles Memorial Coliseum (home of the USC Trojans) until their new home is built, which is projected to be in 2019.

Team owner Stan Kroenke is set to build a $1.86 billion stadium in Inglewood, which is located southwest of downtown Los Angeles. The Lakers and the Kings played at the Forum in Inglewood until both teams moved to Staples Center in 2000. In 2014, Kroenke bought a 60-acre tract in the area, and he later added land where the old Hollywood Park racetrack stood. Last January, he announced plans to build a domed stadium surrounded by an entertainment district.