The British comedy “Four Lions” and the music documentary “Thunder Soul” were named winners of the audience prizes at the Los Angeles Film Festival, Film Independent announced on Sunday.

Chris Morris, a British satirist, won the Audience Award for Best Narrative Feature for “Four Lions” (below), which centers on a quartet of bumbling would-be suicide bombers in London. 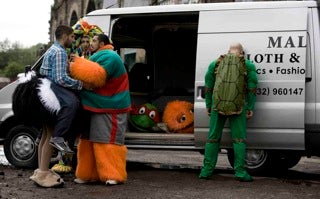 The Audience Award for Best International Feature went to “Thunder Soul,” Mark Landsman’s film about a pioneering 1970s high school jazz-funk band in Houston.  After the outdoor screening at the John Anson Ford Amphitheatre, members of the band performed.

“Presumed Guilty,” a Mexican film about a man imprisoned for the murder of a man he never met, won the Audience Award for Best International Feature

The awards were announced prior to the festival’s closing-day screening of “Despicable Me.”

The festival’s jury awards were handed out yesterday at a reception and awards ceremony.

The audience awards were chosen by a tabulated voting system using ballots cast by filmgoers at the conclusion of most LAFF screenings.  Most of the films presented in all sections of the festival were eligible, though some (the festival opener “The Kids Are All Right” and “The Twilight Saga: Eclipse,” for example) were not.

The Los Angeles Film Festival began on June 17 and ran for 11 days in downtown Los Angeles, mostly in and around the Regal Cinemas complex at L.A. Live.