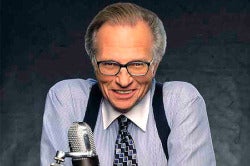 This story was reported by Hunter Walker and Sharon Waxman and written by Walker.

CNN's primetime cornerstone is leaving the network in November, and the reason is not just declining ratings — his "messy" personal life is the primary factor, network insiders tell TheWrap.

Larry King, host of "Larry King Live" for 25 years, announced Tuesday he is ending his primetime show sometime this year.

"I talked to the guys here at CNN and I told them I would like to end Larry King Live, the nightly show, this fall and CNN has graciously accepted, giving me more time for my wife and to get to the kids’ little league games," the 77-year-old King said in a statement released by CNN.

An individual at CNN told TheWrap that King will continue doing his show until November. King signed a new contract with the network to produce quarterly specials once "Larry King Live" ends its run.

The move was not entirely unexpected. King is 77, and the ratings for "Larry King Live" have been down 43 percent this year, a stunning drop for the star talk show host who was once CNN's top-rated talent.

But in spite of King's ratings struggles, a CNN insider told TheWrap it was turmoil in King's personal life rather than declining audience that led to the decision to have him step aside. “What brought this to a head was his messy personal life, and he’s old – it’s too much.”

King and his wife Shawn, his eighth marriage, filed for divorce in April, reportedly after the CNN anchor had an affair with his sister-in-law.  An individual close to the family said that Shawn King has been distraught and threatened to do harm to herself over the family drama.

Multiple network insiders told TheWrap that, with all of the problems with his ratings and his marriage, King had become a liability to the network. “Larry King leaving doesn’t worry anyone. What worries people is who replaces him,” one told TheWrap.

But King leaving does raise a thorny problem of succession for the news network, which suffers from a shallow bench.

Anderson Cooper seemed to be the most likely candidate to inherit the talk show slot, although Joy Behar and Piers Morgan are names that have also been mentioned.

Cooper's contract with the network expires next year.

The departure of King places renewed pressure on network president Jon Klein to find a strategy that will reverse its declining ratings. CNN is now regularly in third place among the cable news networks, behind Fox and MSNBC.

Cooper has been said to be considering leaving the network, and is a choice target for poaching by larger competitors, including a broadcast network. CNN has been working hard to keep Cooper, but he too has been disappointed that his daring forays into dangerous reporting territory — in Haiti and the Gulf of Mexico — have not resulted in increased viewership.

Meanwhile, the exit of King represents the end of an era for the network. For two and a half decades, King's trademark suspenders and easy-going interview style became a signature in American news culture.

King famously would not prepare for interviews, and his style has become unique in a landscape of gotcha talk-show hosting in the style of Bill O'Reilly or Nancy Grace.

In one infamous exchange in 2007, he asked Jerry Seinfeld if he had decided to quit the top-rated comedy or if NBC had cancelled him. Flabbergasted, Seinfeld retorted: "Are you under the impression that I got cancelled? Is this still CNN? I was the number one rated on television, Larry. Do you know who I am?"

On Tuesday night, King read the following statement before spending his hour bantering about the show with Bill Maher:

"Before I start the show tonight, I want to share some personal news with you. Twenty five years ago, I sat across this table from New York Governor Mario Cuomo for the first broadcast of Larry King Live. Now, decades later, I talked to the guys here at CNN and I told them I would like to end Larry King Live, the nightly show, this fall and CNN has graciously accepted, giving me more time for my wife and I to get to the kids’ little league games. I’ll still be a part of the CNN family, hosting several Larry King specials on major national and international subjects.

"I’m incredibly proud that we recently made the Guinness Book of World Records for having the longest running show with the same host in the same time slot. With this chapter closing I’m looking forward to the future and what my next chapter will bring, but for now it’s time to hang up my nightly suspenders."

"Just as CNN redefined the news business, Larry King defined the art of the television interview. His candor, curiosity and compassion are legendary, and his ability to interview people from all walks of life—world leaders, celebrities and everyday people—has made him an icon. Having conducted nearly 50,000 interviews over 50-plus years in broadcasting, Larry deserves to take some time for himself and his family. After 25 years at CNN, he will conclude 'Larry King Live' on his own terms, sometime this fall. We are proud and grateful that Larry will continue the next chapter of his storied career at CNN and will host several specials over the coming years.

Today is about Larry. We will announce plans for the 9pm hour in the weeks ahead."