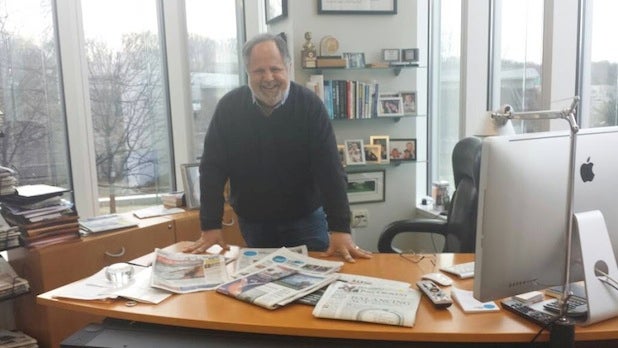 MarketWatch founder Larry Kramer surprised the media world when he agreed to take over USA Today as president and publisher two years ago.

Leading Gannett’s legacy print behemoth with a “digital first” strategy, the media entrepreneur has nonetheless dug into a secret print approach that he says is more than doubling USA Today’s circulation this year.

How’s he doing that? Kramer has brokered a partnership between USA Today and Gannett’s 80 other regional papers, placing full sections of USA Today editorial content and advertising in Gannet’s top newspapers, allowing him to claim those regional readers as part of USA Today’s audience.

“We’ll more than double our print circulation over the next year,” he told TheWrap last week during a visit to his Tysons Corner, Virginia offices.

Bob Dickey, Gannett’s President of U.S. Community Publishing, confirmed that the number is already there: “With the launch of Cincinnati last week, we’ll be at over a million additional circulation for USA Today in print.”

The Alliance for Audited Media now places USA Today as the top newspaper in the country, with a total of 2.9 million daily readers including digital, of which 1.2 million are in print, according to its December figures. Kramer and Dickey said that the first results of this experiment will appear in circulation numbers from the end of 2013, but by the end of Q2 should reflect fully double that number.

The Wall Street Journal is currently cited as the largest print newspaper, with 1.3 million daily readers, but according to Kramer and Dickey, USA Today has already surpassed that number by a million.

Project Butterfly allows USA Today to sell discrete pages of advertising in local newspapers, effectively increasing its national circulation by hundreds of thousands and eventually by more than a million a day.

The experiment started in the last months of 2013, with four regional papers printing USA Today content on a daily basis: The Indianapolis Star, The Rochester Democrat and Chronicle, The Post-Crescent in Appleton, Wisconsin and the News-Press in Fort Myers, Florida. Gannett properties include The Arizona Republic, The Cincinnati Enquirer, The Tennessean in Nashville and others. Now two or three newspapers per week are coming online into the joint publishing plan to include 35 newspapers by the end of March.

Rochester, for example, takes complete pages of USA Today content in its Life section — including national entertainment coverage – and several pages of sports.

In his office, Kramer proudly spread out a half-dozen regional papers, each of which carried pages of USA Today content — and in most cases the logo just below their own mastheads.

The joint approach is improving the product for all Gannett properties, Kramer says, reducing the rate of subscriber loss and allowing for greater acceptance of newspaper price increases to readers.

“So far the results are within a couple percentage points, every market is reacting the same,” said Dickey. “It’s phenomenal. So far, we’re very happy that 18 markets that have gone out, each has reacted like the previous one. It’s proven out that it’s a winner for the consumer.

“It was an idea we had discussed previously at senior management level, and when Larry arrived he quickly saw the opportunity to enhance the USA Today brand,” Dickey added.

Project Butterfly takes a page from the long established television network/affiliate model, which divvies up advertising minutes between the network and local stations, even as the local stations air network programming.

“We are mimicking the TV model,”  said Kramer.  “USA Today appearing in a local newspaper is like NBC News appearing on the local affiliates airwaves.”

Last week the Cincinnati Enquirer featured a USA Today story about businesses suffering from the wave of rough winter weather across the country. The entire page was laid out by USA Today, and sent as a digital file on deadline.

Given that model, Kramer can potentially extend USA Today’s brand into regional newspapers not owned by Gannett — the equivalent of television O and Os (owned and operated stations) — which he fully intends to do.

This approach also solves an advertising problem, which is that USA Today lacked appeal to brands who claimed that because it was largely distributed in hotels, it was impossible to consistently know who its readers were. With the regional distribution, USA Today can describe its readership in great detail, as well as target it to specific regions.

Project Butterfly is a measure that is meant to buy time as Kramer builds enough digital firepower to replace declining print revenues.  “We want to keep a great news organization and brand going by funding it from every possible revenue stream.  Print is still one of the platforms where people want to be reached.  This way we give each of our readers a better single newspaper with both local and national branded news. “

He isn’t sure it will work — but he thinks it will.   “You have to have the ego of a journalist to think you can help save journalism, ” he said.  “We want to be the first traditional media company to successfully morph itself into the digital age”

L.A. Ross contributed to the reporting of this story.