Unique content and the reader’s process of discovery are the key to the survival of newsrooms in the digital age, Larry Kramer, the publisher of USA Today told the audience at TheWrap’s Media Leadership Conference, TheGrill, Tuesday at the Montage Hotel in Beverly Hills,

These days, Kramer told panel moderator, TheWrap’s Brent Lang, “the publication of a story isn’t the end of the process; it’s the beginning. It’s more of a conversation-starter.”

To that goal, Kramer said his paper has lately urged its journalists to express their voice to appeal to digital readers.

“We are encouraging our writers to be more expressive and have a unique voice,” Kramer said, adding that readers in the digital age are more interested in the people delivering their information to them than past audiences were.

Also read: TheGrill: Bill Maher on Why He’ll Never Win an Emmy – Not ‘If You’re Gonna Be the Brave One’ 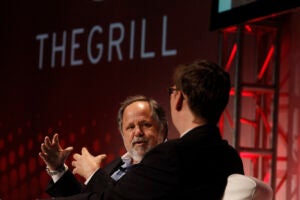 In addition, Kramer said, USA Today is emphasizing the importance of discovery for its readers — that is, presenting something that the readers didn’t necessarily know they were interested before reading a story, as opposed to giving them what they’re already looking for, which has been a driving force of the internet news model.

“I don’t have the automotive industry or the plastic industry in my top 10 list” of interesting topics, Kramer said by way of example. However, if he saw a story about a car manufacturer that decided to build its cars out of all plastics, it would likely grab his attention.

The discovery element is also crucial to the advertising end of journalism, Kramer said during the panel, “Regimagining the Newsroom” — and to that point, he insisted, the advantage goes to the print media.

“One of the reasons print advertising still survives is that print is one of the best discovery mediums; it’s easy to turn a page,” Kramer noted, saying that print ads offer advertisers “a big tableau” to hawk its wares with.

Kramer, who said that USA Today grew its print advertising revenue last year, noted that “we’re still at a point where the advertising dollars for us … we make more per reader in print than we do on the web,” estimating that USA Today takes in about five times per print reader than it does per digital reader.

“We’re gradually building advertising revenue with digital, but we’re not there yet,” he noted, adding that, in general, we’re seeing a resurgence in effective print advertising.”

Still, the digital advertising model must be addressed — a challenging process, Kramer conceded, especially since readers continue to switch the devices they tend to get their news from.

Kramer also acknowledged that the prospect of a paywall for USA Today is likey in the cards.

“I think eventually we do have to have the ability to charge people … it’s really important to the business model. Logic would dictate that [a paywall is] where we need to go.”