Bill Maher has always been straightforward — including about why he’s not the guy who wins Emmy Awards.

“If you’re really gonna be the brave one, you’re not going to win the awards,” Maher said Monday night at TheWrap’s Media Leadership Conference, The Grill. “Pissing people off has a lot to do with losing.”

The host of “Real Time With Bill Maher” — which has been nominated for 10 variety series Emmy Awards without winning — made it clear that his unapologetically lefty and anti-religious leanings were the reason he’s become essentially the Susan Lucci of cable political discourse (including “Politically Incorrect,” he’s garnered 32 unconverted nominations).

“Look, lots of people hate it when you’re anti-religion in a religious country,” said Maher, who lost this year to “The Colbert Report,” after a decade of suffering wins by Jon Stewart‘s “The Daily Show.” 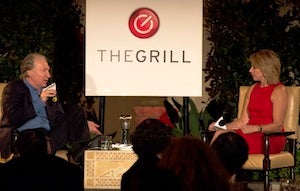 Before the Emmys became a topic, Maher and TheWrap’s editor-in-chief Sharon Waxman‘s spirited sparring at the conference keynote Monday night focused on evolution — not the Creationism-vs.-science kind he’s fond of debating, but the idea that it’s a good thing to change your mind when the evidence compels it.

Maher defended Massachusetts Sen. John Kerry, who was painted by GOP opponents as a notorious flip-flopper during the 2004 campaign.

“He wasn’t flip-flopping on the Viet Cong, I’ll tell you that,” Maher said, while praising Obama for a recent change of heart.

“Obama just did it with Syria,” he said. “He changed his mind. I’m glad he did. He changed because Syria put something on the table that wasn’t there before. Isn’t that a better outcome?”

While conference attendees finished up dinners of tender beef loin and asparagus, Waxman and Maher chewed the fat on the outdoor stage, touching on a range of topics that largely centered on their most intensely shared interest — politics.

Waxman solicited an honest assessment of President Obama from Maher, who — in the discussion’s spirit of nuance — offered both praise and criticism of the second-term president.

“Well, he can’t do everything at once,” Maher said. “He came into office with the worst economy since FDR and the Great Depression … it wasn’t just a bad economy, it was a tire fire. Bush left a flaming pile of dogshit on the White House steps.”

On the other hand, Maher lamented Obama’s continuation of “the drug war, and he’s been keeping up Bush’s War on Terror.”

But he mostly stayed the lefty course.

“He’s dealt with a level of hate and disrespect that no president has ever had to deal with. And I’d (support his election) again, with the money.” Maher famously donated $1 million to Obama’s last campaign.

Though the talk was largely political, Maher said he’s “always been a comedian first,” and if his Beltway sensibilities ever crashed and burned, “I’ll still be able to work the road like I do now.”

To tease out the comedy, Waxman couldn’t resist a rapid-fire round of topics, letting Maher riff on one word at a time:

Children: “I’ve never had that chip in me that wanted children, but … I know a lot of Hollywood players who never wanted to settle down — but want children. They found a way to do both.”

Given the topic, Waxman naturally asked Maher whether he’d consider a run for office.

“Never. I’d never get elected,” Maher said, stressing that he’d be the only atheist in Congress, despite the fact that irreligious people are among the fastest-growing group in the U.S. — including pal Billy Crystal.

“Billy Crystal said to me, ‘How can I believe in God?'” Maher said. “Can you imagine that? Billy Crystal, an atheist?”

But beyond his unelectability, Maher said he wouldn’t want the job.

“First of all, you gotta get up in the morning, and people are scrutinizing you more than in show business … it’s just never gonna happen.”

Asked if he’d still be in television 10 years from now, Maher demurred — noting that even Johnny Carson was pushed out at 67 years old, and at the height of his career.

“At some point,” he said, “the audience gets sick of you.”