During a far-ranging discussion at TheGrill, FX Networks CEO John Landgraf discussed the push for a la carte cable programming, saying it would be a big threat to the Hollywood’s creative community, cable industry — and ultimately a disservice to the consumers — if it took place.

“I think it’s a risk to the whole ecosystem,” Landgraf said at TheGrill, TheWrap’s fourth annual Media Leadership Conference, in Beverly Hills, adding that it was a threat to the creative process.

He estimated that half the jobs would disappear if the current model went away. “If that happened, you’d see the greatest recession in the history of Hollywood.”

While he acknowledged “a certain amount of genuine consumer irritation” over the current cable model and its resultant prices, he insisted that it’s still a relatively cheap form of entertainment compared to other forms of entertainment and that the current way of doing business is essential to a financially viable entertainment industry.

“There are a lot of interested parties that would like to see the system fall apart,” Landgraf said, but “it’s just a really efficient economic model.” Particularly for Hollywood.

Much of the revenue from pay-TV subscriptions is used to fund programming, he said. And ultimately, for the consumer, unbundling would lead to “more homes paying higher prices for fewer channels.”

He noted that that the current process allows for more networks to reach a minimum of 70 million homes, a level of exposure that he said national advertisers require. No one, he said, would buy advertising on a network in only 30 million homes — “there would be no benefit to it for a Proctor & Gamble.” 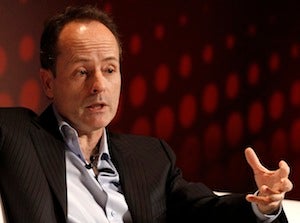 As for Arizona Sen. John McCain’s bill to unbundle cable channels, Landgraf said it was “total political grandstanding.” McCain, he said, “has no significant support” in either Congress or the Senate.

Even in this age of Netflix and other viewing options, Landgraf said, there are “a number of underlying economic reasons why we think it still makes sense” to develop three separate linear channels and that splitting the pie three ways would create “a larger economic model” that will allow them to further invest in programming.

As for FXX, Landgraf said that the growth of the network, which launched Sept. 2, has been modest, but encouraging, generating 1.4 million of hours of consumption in its first three days. When you do the math, Landgraf said, “three human lives were consumed in the first three days of this dinky little channel.”

He said that FX itself was built on risk-taking — but admitted to one risk he didn’t take.

“I wish I hadn’t passed on ‘Breaking Bad,’ I can tell you that. I had ‘The Shield,’ ‘Nip and Tuck’ and ‘Rescue Me.’ I thought, Gost, a white male anti-hero network seems kind of narrow to me.”