Utopia will release the film theatrically in the U.S. later this year.

“I’ve been so impressed with how quickly Utopia has established itself as a brave and committed voice in independent and experimental film,” Dunham said in a statement. “They don’t cower from unusual or divisive work, and they have utter respect for the filmmakers’ voice, and I couldn’t feel luckier to be releasing Sharp Stick under their auspices.” 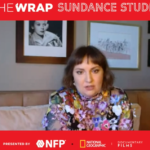 Also Read:
How Lena Dunham and Her ‘Sharp Stick’ Cast Embraced the ‘Toxic’ and ‘Messy’ Aspects of Women’s Lives (Video)

In her first feature since her 2010 debut, “Tiny Furniture,” Dunham drew from her own medical experiences for ”Sharp Stick,” which premiered at last month’s Sundance film festival.

“The film is about a young woman who is dealing with the trauma of a hysterectomy and illness that she suffered in her teens,” Dunham told TheWrap’s editor-in-chief Sharon Waxman at the virtual Sundance studio.

In “Sharp Stick,” Froseth stars as Sarah Jo, a young woman who begins an affair with the father (Bernthal) of a child she babysits and whose own wife (Dunham) is pregnant. Sarah Jo lives at home with her mother (played by Jason Leigh — “our patron saint,” as Dunham put it) and her sister Treina (Paige), an aspiring TikTok influencer whose “inner turmoil doesn’t match the glossiness that she’s trying to project,” Dunham explained. “These two girls are sort of different sides of the coin of how women learn to project their sexuality out in society.”

Dunham tapped into her experience with endometriosis and her decision to undergo a hysterectomy at 31 for “Sharp Stick,” which she wrote, directed and produced. Making the film was both “an incredibly healing experience” and an “incredibly challenging experience,” she said. In addition to the heady material, she shot the movie during lockdown in just 14 and a half days, harkening back to the “scrappy spirit” of “Tiny Furniture,” which Dunham shot in her parents’ living room in New York City.

The deal was negotiated by Danielle DiGiacomo for Utopia and CAA Media Finance on behalf of the filmmakers.