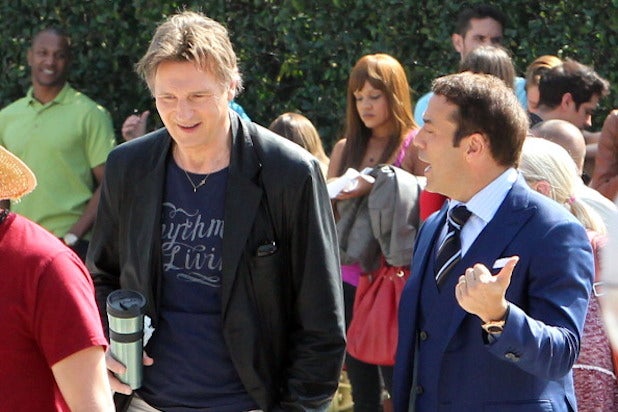 Liam Neeson has taken time out of his promotional tour for “Non-Stop” to film a small role in the “Entourage” movie.

Neeson likely plays himself in the movie, which is currently filming in Los Angeles, though the context in which he’ll appear remains unclear. Eyewitness reports have Neeson driving a gold Bentley, with Piven steering a red Ferrari fit for a new studio chief.

The original “Entourage” cast is returning for the movie, and they’ll be joined by Billy Bob Thornton and Haley Joel Osment as father-and-son film financiers.

“Entourage” aired on HBO from 2004-2011, and Neeson has ties to the network, having played himself in a memorable episode of “Life’s Too Short.”

Neeson recently wrapped WB’s thriller “Run All Night” and can currently be heard voicing a cop in the studio’s animated “Lego Movie.”

Also read: Liam Neeson on ’60 Minutes': Why The ‘Non-Stop’ Star Makes All Those Action Movies (Video)

Universal’s “Non-Stop” is scheduled for take-off on Friday, and Neeson next stars in the studio’s comedy “A Million Ways to Die in the West” and the crime drama “A Walk Among the Tombstones.” He’s also attached to star in Martin Scorsese‘s “Silence” and the action sequel “Taken 3.”