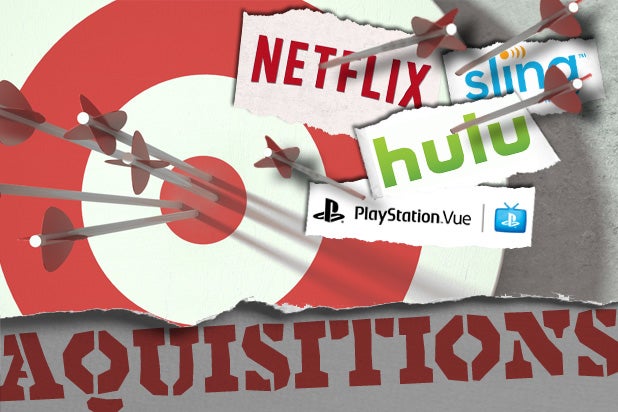 The bundle is dying. Long live the new bundle?

However, customers are unlikely to subscribe to all of them — and growth has been slow even in a less crowded field. That could result in consolidation of the type we’ve seen with cable companies and content producers.

“We’ll see a wave of consolidation, and it’s not too far away,” Hale Boggs, the chairman of Manatt Digital Media, told TheWrap.

Boggs said the sheer number of new streaming services is flooding the market in a way that makes it hard for each individual one to stand out.

And while each tends to cost a small amount of money individually, signing up for the “basics” such as Netflix ($7.99 a month), Amazon Prime ($8.25 a month) and Sling TV (starting at $20 a month) will quickly add up for consumers.

Especially when you factor in the $15-per-month HBO Now, for hits like “Game of Thrones” and “Last Week Tonight,” and niche newcomers like Disney’s proposed ESPN-branded sports streaming package.

All of that places consumers within a paradox of choice, where too many options makes it harder to commit to one.

And we’re already seeing the effects. Sling TV has accumulated about 700,000 subscribers since launching in February 2015 — or about half as many as ESPN shed between February and June of this year.

“The proliferation of [streaming] services may be diminishing the value of each individual one,” Boggs said.

The cable bundle consistently grew its subscriber base for decades right up until it became bloated, expensive and erstwhile TV watchers started looking for new options, which began to happen in full force around 2012.

As more channels launched and rights fees for desirable content like live sports increased, cable providers passed those costs to customers through higher carriage fees — and a more expensive cable package — while wages across the country remained flat. That math no longer worked for millions of Americans.

“The whole machine was built for 20 years to stuff more shows on more channels,” Robert Tercek, a digital media executive and consultant, told TheWrap at the Digital Entertainment World conference in February. “But the strategy of launching ever more channels is history.”

Disney’s ESPN peaked at 100.1 million subscribers in 2001. At last count, that was down to 88.8. And that’s the main reason that despite its movie studio setting a record pace and Shanghai Disneyland Park bringing in big crowds, Disney’s stock is down 7.8 percent year-to-date.

At the time, Tercek said the softness in cable network stocks made them likely acquisition targets, and predicted Time Warner Cable would find a buyer — as it did in May, when Charter acquired the company along with fellow cable provider Bright House. There’s also the fact that people are leaving TV without necessarily flocking to something else.

ESPN — which is on pretty much every basic cable package — has shed more than 11 million subscribers in 5 years, but Sling TV only has about 700,000 subscribers. And with parent Dish Network shedding terrestrial subscribers like its competitors, its stock is down 10 percent this year.

To their credit, cable and satellite companies as well as the media networks who rely on them for carriage fees have seen the trends and have invested in streaming services of their own. Dish owns Sling TV. AT&T-owned DirecTV is launching its DirecTV Now service before the end of the year. And Hulu is owned by a consortium including Comcast, Disney, Fox and Time Warner. But so far they haven’t connected with viewers.

“Viewers are clamoring for streaming content, but they may not get what they desire with the existing services,” Glen Rothstein, a partner at Greenberg Glusker who specializes in entertainment law, told TheWrap. “In order to get the array of content they watch, they have to switch services and even devices.”

Rothstein believes that consolidation could be a way for existing live streaming providers to compete with behemoths like Amazon and Microsoft, who have the technical ability to stream at scale and significant cash to accumulate content rights.

At a certain point, streaming services that are intriguing but not sufficient alone could become stronger together. And the longer they continue to struggle in an uphill battle to bring on new customers in an increasingly crowded space — and Wall Street takes notice — there could be more of an incentive to team up. Joining forces could also allow for offerings that include the content of several existing providers at a price point lower than subscribing independently.

The bundle dominated for decades before it became bloated and expensive and sent TV watchers searching for other — skinnier — options. But the slow ramp-up of TV-replacement streaming services shows people don’t really like shopping a la carte. A streamlined streaming bundle could thread that needle, and streaming providers looking to buy one another is an obvious way to get there.