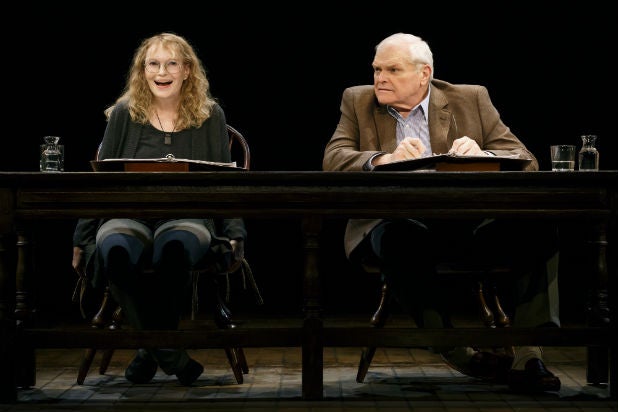 The most remarkable thing about A.R. Gurney’s two-hander “Love Letters,” which opened Thursday at the Brooks Atkinson Theatre, is that it was first performed professionally in 1988, years before email was a common form of communication.

Although the two characters, Melissa and Andrew, read aloud letters and postcards they’ve shared for decades, most of those missives emerge as the kind of short “dialogues” people today have via email. In “Love Letters,” there are no OMGs or WTFs, but playing Melissa, Mia Farrow does elicit a few laughs with some well-placed expletives.

Aside from being prescient, Gurney is not a subtle playwright. Melissa and Andrew’s childhood exchanges are as cute as they are dull. We wait for some drama to emerge, and Melissa’s future breakdown is signaled with her clumsy admission that a stepfather has sexually abused her. It’s a bomblet she unleashes in a sentence at the end of one otherwise cheery letter.

That Andrew, played by Brian Dennehy, will grow up to be a pompous jerk is evident from the Playbill. The rest of his name is Makepeace Ladd III, and he doesn’t become just a U.S. Senator but a Republican to boot, albeit a self-identified “liberal Republican.” Which gives you an idea of how old this play actually is.

She’s born rich, he services the rich. So what’s their problem?

Unlike Farrow, Dennehy doesn’t affect a kid-like sing song voice for his early readings. But this actor could read the phone book and be engaging. Instead, he’s performing “Love Letters,” so we don’t have a choice.

Farrow has the far juicier part. Although in the beginning it appears she hangs on to her girlish voice a tad too long, it soon becomes evident that here is a rich, pampered, unloved young woman who never quite grows up. While Dennehy is stuck playing a Republican, Farrow gets to show evidence of alcoholism, substance abuse, artistic failure, and the pressures of being the Other Woman to a well-known politician. Gurney may have written a caricature, but Farrow colors it with a heartfelt performance.

This actress was last seen on Broadway in 1999 when she performed a one-night reading of “Who’s Afraid of Virginia Woolf?,” alongside the play’s original Martha, Uta Hagen. The big news coming out of the benefit performance was that Hagen, at age 80, could still be a riveting Martha. For me, however, the revelation was Farrow, who made a completely convincing “slim-hipped” Honey, at the age of 54. Never had I seen the role delivered with such delicacy and humor. Hopefully Farrow’s month-long stint in “Love Letters” leads to future Broadway assignments.

Directed by Gregory Mosher, “Love Letters” continues on Broadway with a variety of other casts, including Dennehy and Carol Burnett, Alan Alda and Candice Bergen, and Anjelica Huston and Martin Sheen.