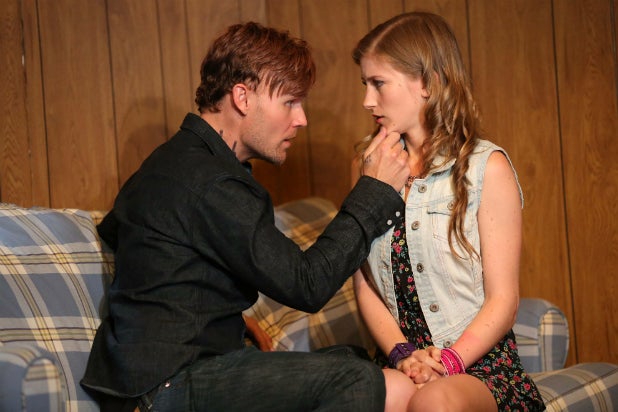 That’s just one of the minor misfires in James Franco‘s staging of Robert Boswell’s new play, “The Long Shrift,” which opened Sunday at off Broadway’s Rattlestick Theater. More significant than Richard’s underwear, however, is why his accuser, Beth (Ahna O’Reilly), would repeatedly show up at his house to beg for forgiveness, among other things, and ask Richard (Scott Haze) to their upcoming 10-year high school reunion.

And even more risible is why the 18-year-old Macy (Allie Gallerani) shows up at that same house to insist that Richard attend the reunion, which she has organized to help her get a college scholarship or something. Does putting on a class reunion help you get into college these days? And when did high school students ever put on parties for people pushing the Big 3-0?

“The Long Shrift” is not a comedy, but Franco, who is making his directorial stage debut here, has certainly pushed Gallerani to mine all the laughs in an airhead character that has been written with total contempt for the young.

Very early in Boswell’s play, Richard’s mother (an angry, riveting Ally Sheedy) complains about their house being a real dump. And she’s right: It’s way too small to contain all this drama. In a movie, Richard, Beth and Macy (who thinks putting together the class ex-con and his accuser will be a real party coup) might meet on more neutral ground — like a mall or a Starbucks — but “The Long Shrift” is pretty much a single-set play (with a couple of notable exceptions), so that means people constantly have to express their shock at being in Richard’s living room with lines like “Mother! God!” and “Goddammit, does this ever end?!” and “What else could you possibly want from me?” And, because credibility has been stretched to the level of low farce, Beth keeps asking for another shot of whiskey, even though the first of many goes right into her face.

Weaving in and out of this impossible narrative is another play, a better and much shorter play having to do with Richard’s parents, Sarah and Henry (a nicely understated Brian Lally). Sarah, who appears onstage all too briefly, never visits her son in the five years he spends in prison. She has real doubts about his innocence, doubts not shared by his father. Although the story of a high school reunion blowout between an ex-con and the woman who falsely accused him of rape seems like sure-fire drama, it’s the much less flashy struggle over a mother and father’s loyalties that registers as truly poignant and heartbreaking.