One of the reporters who covered the “Making a Murderer” trial says everyone involved — police, lawyers, and the filmmakers who re-examined the case — has ignored statements by Brendan Dassey that Steven Avery touched him inappropriately.

TheWrap has obtained transcripts containing Dassey’s statements on the issue. In a May 13, 2006 police interview, Dassey told police that Avery, his uncle, sometimes tried to grab his penis “through the pants.” In a phone call later that day to his mother, Barb Tadych, Dassey said he told police that Avery “would grab me somewhere where I was uncomfortable.” 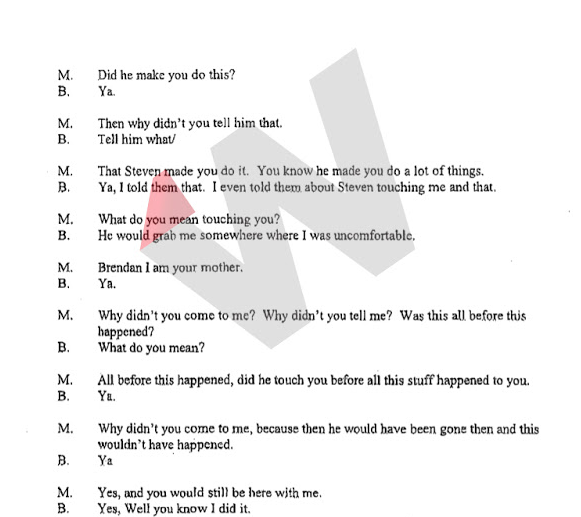 The phone transcript is part of documents gathered by the defense and obtained by TheWrap. The police interrogation is in court records.

Journalist Dan O’Donnell, who is now host of the “Rebutting a Murderer” podcast, says whether Avery sexually molested Dassey is crucial because it raises questions about whether Avery may have had more coercive power over Dassey, 16 at the time, than indicated in the trial or the Netflix series.

“He clearly is saying that Steven molested him,” said O’Donnell. “Really, I don’t have any reason to believe that Dassey would have been lying.”

Avery’s new attorney strongly denies her client molested Dassey. Both men were convicted in the murder of Teresa Halbach and sentenced to life.

TheWrap reached out to filmmakers Moira Demos and Laura Ricciardi through their publicist and Netflix, who declined to comment.

O’Donnell, who is now a radio host in Milwaukee, launched his podcast — one of the most popular on iHeartRadio — because he believes “Making a Murderer” has a pro-Avery slant. He said he is troubled that the Netflix series “never even entertained as a possibility” that Avery molested Dassey.

“I don’t know if it’s the very sensitive nature of talking about crimes against a child,” O’Donnell told TheWrap. “It’s very taboo. [Dassey] does say it and he says it in such a matter-of-fact way, it’s weird.”

He added: “That really stuck with me because of a lot of research and work I’ve done in child sexual assault, especially by a trusted loved one or family member. It’s really sad, it becomes almost like a master/servant relationship in which the molester has this almost God-like power over some victims,” said O’Donnell. “Someone like Brendan Dassey, who the defense admits was very easily suggestible, would have been especially [suggestible] by someone if he was being molested, especially by the molester, could be convinced very easily to do something that Dassey had to know in his heart was very, very wrong.”

Dassey made the allegation during the same interview with police in which Avery defenders contend that Dassey was manipulated into confessing.

“Mr. Avery categorically denies this unsubstantiated allegation,” Avery’s new lawyer, Kathleen Zellner, said in a statement to TheWrap. “Mr. Dassey’s confession is clearly false, as the lack of corroborating evidence shows. The master/slave analogy is more applicable to the police abusing their power by coercing a confession from a 16-year-old who was highly suggestible because of his low IQ and isolation from his family during the interrogation. It is typical for wrongful conviction cases to be based on rumor and innuendo such as this in an effort to distract the public from the complete lack of evidence supporting the conviction. Pure, utter rubbish–never used in either trial because it is untrue.”

The prosecutor in the case, Ken Kratz, said the state was never asked to investigate the veracity of any sexual molestation allegations.

“We also were never presented with any defense that suggested that Brendan lacked the free will to make decisions. Some defenses are available in Wisconsin, such as ‘necessity’ or ‘coercion,’ but those were not raised by the defense attorneys,” he said, noting that Avery’s attorneys instead focused on “the issue of false confessions, and whether Mr. Dassey’s limited intelligence made him more susceptible to police interrogation methods.”

Dassey’s former attorney, Len Kachinsky, said he had no knowledge of Dassey accusing Avery of touching him inappropriately. “No,” Kachinsky told TheWrap. “Not during my watch.”

Judge Jeanine Pirro, a former prosecutor and the host of Fox News’ “Justice with Jeanine,” told TheWrap that “grabbing the penis of a minor, irrespective of whether he is clothed, is generally considered molestation if it is for the sexual gratification of the abuser.”

O’Donnell, a non-practicing attorney who covered the case for 620 WTMJ in Milwaukee, appears in “Making a Murderer” listening to press conferences and walking courtroom halls. So far, he has only briefly addressed the touching claim on his podcast.

“I’m not sure if Dassey, if he really was as slow and as simple as the documentary makes him out to be, could make that sort of thing up,” O’Donnell said.

“In covering this case, Brendan Dassey sort of becomes a tragic figure,” he added. “Making a Murderer’ wasn’t the Manitowoc Sheriffs department making Avery a murderer, but rather Avery making Brendan Dassey into a murderer.”