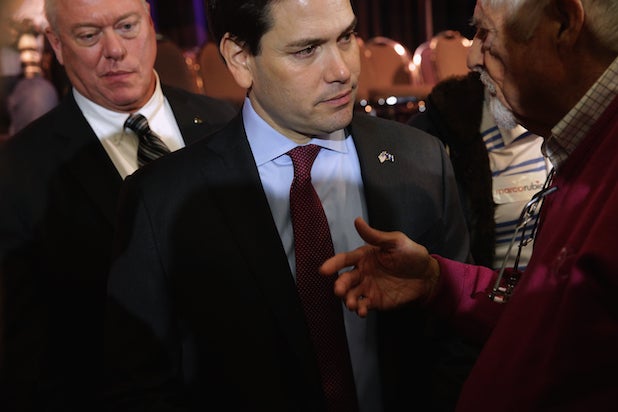 The GOP presidential candidate made headlines on Thursday for cracking a tooth. The incident happened aboard a flight to Washington, D.C. on Wednesday evening, when Rubio chomped on a frozen Twix bar.

“I just bit into a Twix bar and I go, ‘man this Twix bar’s got something really hard in it,'” Rubio told The Wall Street Journal. “And I go, ‘Oh my gosh, I cracked my tooth.'”

The Twix debacle quickly became a trending topic on Twitter … and let’s just say, it’s not exactly helping his campaign find its footing after a bad debate performance last week, followed by a disappointing showing in the New Hampshire primaries on Monday.

Rubio, 44, joked about the incident at least saying, “I think I’m getting old, man.”

The Florida senator said the injury wasn’t painful, assuring reporters on Thursday that he visited a dentist for a temporary fix. He says he intends to get a permanent replacement as soon as he returns home to Miami.

Reps for Mars (Twix’s parent company) did not immediately respond to TheWrap’s request for comment.

See the biting tweets below.

Marco Rubio broke a molar biting into frozen Twix bar. Give that man the nuclear codes!

Horrible debate appearance. Bad election results. And not a broken tooth by a frozen Twix bar? I'm not a… https://t.co/0q3gMAmruG

Marco Rubio when he cracked a molar on a Twix pic.twitter.com/myqCccArXr

Marco Rubio's tooth broke when he bit into a Twix..how can you vote for this guy as President?t

Here you go, folks. Blueberry on blueberry for @marcorubio. pic.twitter.com/0sxEa9HSn5

Marco Rubio cracked his tooth on a Twix bar, Chris Christie offers to finish candy for him.

Oh, Marco Rubio: You may have wanted to keep that frozen Twix story to yourself https://t.co/BnHCbkG7jy

@ndoto Looks like you have someone to commiserate with https://t.co/oYI4NcIZU8

If Marco Rubio can't handle a Twix bar how the hell is he going to handle ISIS or North Korea?

Marco Rubio hurt by a Twix. Donald Trump scared of little Megyn Kelly; what in the world is going on wimpy men!

Also Read: Perplexed Donald Trump: Why Is Everyone Talking About Marco Rubio?