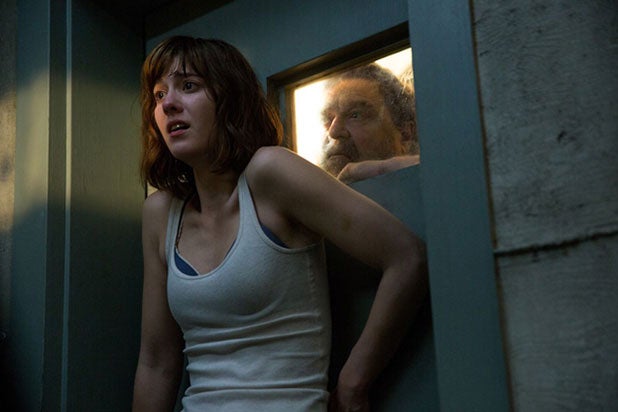 Starting today, Mary Elizabeth Winstead can be seen in J.J. Abrams‘ “10 Cloverfield Lane,” a film that seemed to pop out of nowhere when the film’s release date and trailer were announced in January. Secrecy about the plot for the “blood relative” to 2008’s “Cloverfield” had been airtight, even for the actress, whose script self-deleted after she read it once.

“My agents called me, and they were like, ‘we don’t know anything about it, we are not allowed to read the script, nobody is allowed to read it,'” Winstead told TheWrap. “It was this super-mysterious thing, they were just like, ‘someone is going to send you the script from Paramount and you are going to get this link and you are going to read it and as soon as you read it, it’s going to delete itself, so after reading it once you have to decide if you want to do this thing.'”

After meeting Abrams and first-time director Dan Trachtenberg, she took on the role of Michelle, who wakes up chained to the wall of a cellar, with John Goodman‘s character, Howard, telling her that the world has been attacked and has left the air unbreathable. The bunker is the only safe place, but the audience is kept on the fence throughout the duration of the movie, where they don’t know whether Goodman is telling the truth or not.

Also Read: '10 Cloverfield Lane': 'Check Your Nerves at the Theater Door,' and 8 Other Survival Tips From Critics

“That’s the design of the movie — to keep people guessing, to let audiences draw their own conclusions,” she added. “The great thing about the movie is that it is incredibly satisfying, it leaves a lot of those questions unanswered. I think you feel like you go on this journey and you get so much out of it. Part of the fun is trying to figure out for yourself what is really going on.”

Also starring John Gallagher Jr., the film opened to an impressive $1.8 million at the Thursday previews, and currently holds a “certified fresh” score of 90 percent on review aggregator Rotten Tomatoes.

See TheWrap’s Q&A with Winstead below.

TheWrap:  Congratulations on a great film. The air-vent scene was the scariest scene for me. Are you claustrophobic at all?
Winstead: That was the scariest thing for me too, so I’m glad it had that effect. I’m not claustrophobic but they built the vent to my specific size but just a little too small for me, to make it feel real and difficult for me to crawl through and it was incredibly long and then to get out of it, I had to climb upwards. There was no foothold, no ladder, it was just me figuring out this puzzle of how to get out of this thing and I was swearing and sweating and I had to stop myself because I couldn’t swear that much in the movie. It was a stressful thing. It became this big joke on set, “I think you’re going to go back into the vent today,” because they knew how much that would get to me … I felt like the character, I really was trying to devise a plan to get out of there every time, so by take 10 I was like, “come on, guys!”

How did everyone manage to keep the film under the radar for so long?
It was there all along, it was on IMDB. It’s the same movie, just a different title. We kept the plot under wraps as much as possible because of the nature of the film — it’s a movie you don’t want to spoil for people. I didn’t want to ruin the experience of it.

Did you have to prepare for the movie, mentally or physically?
I did do a little research for myself. I read a couple books that were written by women who were kidnapped and kept in small spaces, to understand what it would do to your psyche. Physically, I prepared as much as I could … I knew it was going to be an exhausting physical experience. I didn’t want to collapse halfway through a scene [laughs]. I prepared a little bit in that sense because ultimately, Michelle wakes up in that environment having no idea how she got there and she is unprepared to be in that scenario. So I used that to my advantage and jumped into the movie somewhat unprepared.

How was working with John Goodman, even though he had that obscure character?
It was kind of surreal. I grew up watching him and loving him, and the majority of his roles were lovable where you can’t help but love him and feel like he is part of your family. … My mind and body were confused, they were like “no, you’re John Goodman! You’re the most lovable person in the world!” It took me a little time to adjust how that was going to feel, and seeing him as the character and not as John Goodman. He is so brilliant: he can go from being totally sweet, telling jokes, to having the most sinister, scary, terrifying voice that I’ve ever heard in my life. He can go from 0 to 60 like that, he is one of the actors that can do anything, I was very much in awe. I think it was such a brilliant choice of casting, it plays with the audience’s expectation, which is the point of the character. You still want to like him, although he’s doing things that seem strange and misguided. But there’s something that makes us think he’s trustworthy. He’s the perfect person to be able to vacillate between those things.

What was your audition process like?
The casting came through my agents but it was a bit different. They called me, and they were like, “we don’t know anything about it, we are not allowed to read the script, nobody is allowed to read it.” It was this super-mysterious thing, they were just like, “someone is going to send you the script from Paramount and you are going to get this link and you are going to read it and as soon as you read it, it’s going to delete itself, so after reading it once you have to decide if you want to do this thing.” I read it and immediately loved it, but obviously wanted to meet with J.J. and Dan and talk about it. Once I met with them, I was completely on board. I loved that my agents were like, “we don’t get to have an opinion in this!”

Did you have any concerns working with a first-time director?
When you are working with a first-time director, there is this unknown variable of how it’s going to turn out. When I met with Dan [Trachtenberg], especially once we started shooting, I could see he was so sure and in the mind of the character, which made it such an incredible collaboration, and I was so happy he let me in on the process and I felt we were going through the journey of Michelle together.

You managed to keep the film on the down-low. There have been a lot of rumors and speculation about the film, can you talk a little about that?
A lot of people have misinformation or just got the wrong idea with the way it was explained. The script from the beginning was pretty much the movie that was shot and the movie that is on the screen, other than dialogue changes and things that we collaborated on. This is the story it always was. During pre-production, they realized that it resembled “Cloverfield” and thought, maybe this would be interesting to connect the two stories. It’s almost like a “J.J. Twilight Zone,” I think that’s a cool idea and an exciting way to build a franchise with these episodes.

That reminds me, J.J. hinted at some sort of trilogy.
Yeah, I don’t know if that would mean that there would be another story that wouldn’t be linked to the first two films in the same way that this one isn’t linked to the original, or whether we would continue this story. I would love to continue this story if that’s something they wanted, and if that opportunity would be on the table, that’s something I would want to do because I loved this character and the people I worked with.

What are your upcoming projects? Are you going to be in the next “Star Wars” now that you know Abrams?
I am open to that discussion, J.J.! [Laughs] Who knows. I’m currently working on a show called, “BrainDead” … It’s a hybrid of genres, it’s a horror, drama, comedy sort of political thriller that is set in D.C., and it’s all scary and infiltrating the brains of congresspeople.