Rep. Matt Gaetz longs for the old days of Fox News, when “America’s angry uncle” Lou Dobbs could be as “politically incorrect” as he pleased and, more importantly, Paul Ryan was not involved.

Gaetz went after Ryan and the network on the first episode of his new podcast, “Firebrand,” on Thursday, accusing the former House speaker and now-Fox News board member of  having a hand in Dobbs’ show going off the air.

The Florida congressman prefaced his rant by expressing his gratitude for Fox News, which he was a fixture on until it was reported that he is under federal investigation for sex trafficking. 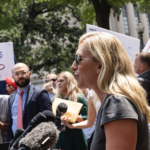 “I appreciate the platform Fox News gave me for years,” Gaetz said. “It allowed me to get key information to the country. I have many friends still at Fox News and I enjoy our discussions, whether they’re on-air or off-air.”

He went on to praise Dobbs and his now-defunct Fox News program, “Lou Dobbs Tonight,” describing it as one of his “favorite shows on the platform.” Dobbs had been with the network for 10 years when his show was cancelled in February 2021 due to a lawsuit accusing the host of spreading lies about the 2020 election.

Gaetz called Dobbs “sometimes politically incorrect” but “usually right about stuff” before playing a supercut of Dobbs slamming Ryan during his tenure as Speaker of the House of Representatives. Ryan was speaker of the House from 2015 to 2019, before joining the network’s corporate board two months after his departure.

Also Read:
Newsmax Rejected Matt Gaetz When Congressman ‘Reached Out’ for a Job

The supercut included clips of Dobbs calling Ryan “a fraud in every way” and accusing him of having “betrayed” the Republican Party by supporting left-wing immigration policies.

“Now that Paul Ryan has concentrated power at Fox News, Lou Dobbs is no longer on air,” Gaetz said. “He can’t guide the populist right away from the invade-everywhere, invite-everyone version of Republicanism that sells out to K Street and abandons Main Street.”

“Paul Ryan never used his considerable power as speaker for Trump’s wall or other key immigration reforms, but he was able to use his power at Fox News to cancel the great Lou Dobbs,” Gaetz added. “What a shame.”