The news conference was held outside the Justice Department in Washington as an attempt to defend the individuals – or “political prisoners,” as the politicians referred to them in the presser – involved in the Jan. 6 insurrection at the U.S. Capitol. The representatives were joined by Louie Gohmert (R-Texas) and Paul Gosar (R-Arizona).

As Greene began speaking, a man started to blow a whistle and continued to do so throughout the representatives’ statements. Another protester held up a “RAPIST” sign, assumably referring to Gaetz, who is under federal investigation for an alleged sexual relationship with a 17-year-old girl and possible violation of sex trafficking laws, though Gaetz denies the allegations.

Other demonstrators held up signs that read “Jan 6th was an inside job” and “Traitors + Rapists: Sit Down.” 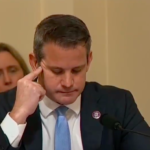 Greene ultimately addressed the protesters during the conference, saying, “To the guy that’s blowing the whistle: we are not deterred.

She continued: “And so for anyone that’s here, being an activist and yelling today, here’s the statement that I need everyone to understand: we will not back down, we will not stop asking questions, we are looking for the truth. And we believe the truth can be found by reaching out and answering and asking the right questions to the right people.”

An aide confronted the man blowing the whistle, asking him, “Are you trying to assault people with auditory weapons” before shutting down the conference, yelling to the media “You saw what happened here, the left shut us down!”

The politicians were escorted out of the DOJ by security, as a woman followed Gaetz, repeatedly asking “Are you a pedophile?”

This disastrous news conference took place during the same time that police officers were testifying on Capitol Hill before the Jan. 6 select committee that is investigating the insurrection. During this hearing, one police officer described the rioters as “terrorists,” while others recounted the violence they witnessed the rioters commit the day of the attack.

And watch the full police officers’ testimonies of the insurrection here.