Here’s something else Tyler Perry can do all by himself: the Oscars.

Or maybe he’ll have a co-presenter.

Solo or not, Perry is the latest Oscar presenter to have his participation announced by the show’s co-producers, Bill Mechanic and Adam Shankman. 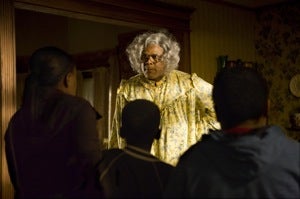 The press release announcing the booking doesn’t mention Perry’s executive producer status on the Best Picture nominee “Precious,” instead highlighting a batch of films that weren’t exactly Oscar bait: “Diary of a Mad Black Woman,” “Madea’s Family Reunion,” “Meet the Browns,” “Daddy’s Little Girls” and “I Can Do Bad All By Myself.”

The funny thing is, when the ratings come in and reveal a big boost in the show’s viewership, it’ll be impossible to determine how much of the increase is due to participants like Perry, Lautner and Cryrus, and how much came just because of “Avatar.”