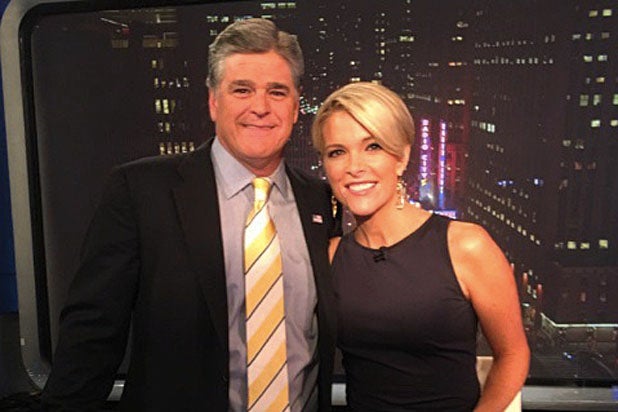 Fox News anchors Megyn Kelly and Sean Hannity kissed and made up on Thursday after having a high-profile fallout via Twitter the night before.

The “Kelly File” host tweeted a cheery photo of the pair together with the caption, “We’re Irish. It’s complicated. #friends.”

Meanwhile, Hannity denied one Twitter user’s accusation that they had been ordered to make nice by their “corporate masters.” He wrote, “Actually, that’s just not true. 2 friends just worked out a MINOR disagreement.”

The reunion came after Hannity called Kelly out on Wednesday for being biased toward Hillary Clinton in the heated presidential race.

“u should be mad at  @HillaryClinton Clearly you support her. And @realDonaldTrump did talk to u,” he tweeted, while linking out to a clip on Mediaite.com in which she said Trump will only go on “Hannity” because it is a safe place.

“Donald Trump, with all due respect to my friend at 10:00, will go on Hannity and pretty much only Hannity and will not venture out to the unsafe spaces these days, which doesn’t exactly expand the tent,” Kelly said in the video.

She also went on to criticize Clinton, however, by saying that the Democratic nominee was opting for soft interview opportunities as well.

See their make up tweets below.