Michael Phelps may be the most decorated Olympian of all time, but even he’s afraid of Katie Ledecky. In fact, during his Olympics commentary on Sunday, Phelps admitted the 24-year-old U.S. superstar swimmer would’ve wiped the floor with him in 2016.

Phelps, the greatest male swimmer of all time, has been serving as both a commentator and correspondent for NBC at the Tokyo Olympics, giving his insights on the biggest races in the pool. And though Ledecky ended up taking silver in the 400m freestyle on Sunday, Phelps said “she’s the GOAT” right now, even compared to him.

“I had the privilege to train with her at the last training camp, in 2016. I’m very happy that she didn’t do the exact set with us that day because she would’ve destroyed me,” Phelps said with a laugh. “Oh my gosh, her long course, when she trains — oh, she’s incredible.”

See the full clip of Phelps in the video above. 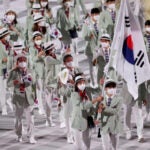 Indeed, in the prelims of the 1500m freestyle, Ledecky cruised to an Olympic record, finishing with a 15:35.35. That marks the eighth-fastest time in history. Ledecky is the current world record holder in the event at 15:20.48, an impressive 18 seconds ahead of Denmark’s Lotte Friis, who holds the event’s second-fastest time. Many are expecting Ledecky to break her own record in the event finals at the Tokyo Games.

And even after coming in behind Australia’s Ariarne Titmus in the 400m freestyle on Sunday — finishing just over half a second behind her — Ledecky was nothing but graceful.

“I think I flipped at the 300 and saw she was right there and it was going to be a fight to the finish. I fought tooth and nail,” Ledecky told NBC’s Michele Tafoya after the race. “It was an awesome swim by her.”