The reputation of writer-director Michel Gondry is built more on concepts than characters. His name conjures artistic images: a Chemical Brothers kaleidoscope; Lego White Stripes; the cobbled-together videos of “Be Kind, Rewind”; vanishing reality in “Eternal Sunshine of the Spotless Mind.” In Gondry’s new film, “Microbe & Gasoline,” he puts people first in a charming if comfortably familiar coming-of-age tale.

Two high school boys, chafing at their social-outcast status, build a cautious friendship and eventually take to the back roads of France in a homemade vehicle. Daniel (Ange Dargent) scrawls raw portraits of friends and relatives as he yearns for the attention of a girl in school. Diminutive, with shaggy hair and soft features, Daniel is gently mocked with the nickname “Microbe.” When Théo (Théophile Baquet) — nicknamed “Gasoline” for the petrol smell embedded in his clothes — transfers to Daniel’s school, the two find a connection in similar insecurities and rocky family lives. (Notably, Audrey Tautou plays a supporting role as Daniel’s mom.)

Weaving narrative threads drawn from his own past, Gondry eases into his story, tenderly recreating parental conflicts and incidents at school, observing with an atypical calm as cumulative moments of rejection and boyish yearning push the duo to a quiet tipping point. In the manner of isolated teens in any culture or generation, Microbe and Gasoline forge and test their friendship in moments where social and familial ambitions fail, leaving each boy as, seemingly, the other’s only refuge. 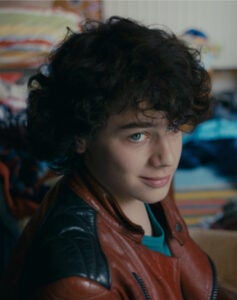 Soon the handy Théo leads the duo to engineer an escape from normalcy. The film’s signature image of Gondry whimsy is a device born out of the boys’ shared creativity and restlessness: a homemade go-kart transformed into a sort of makeshift RV, less a would-be Winnebago than a wood-paneled Tiny House on wheels.

Once the two boys hit the road — which, admittedly, doesn’t happen until the film’s halfway mark — the familiar first half folds open into a rambling road trip punctuated by encounters with other outsiders and eccentrics. A couple suffering the pains of empty-nest syndrome sees the boys as new surrogate children, while a gang of massage-parlor hoodlums sees them only as young marks. Even the most fraught moments, however, are wrapped in a mild summer haze; the greatest conflict is between the boys as they test their friendship.

Dargent and Baquet inhabit the two lead roles with a relaxed ease. They’re relatively untested before the camera, and they approach the material with simple, unaffected confidence. Dargent stands out by transforming from willowy and shy, in the mode of Wiley Wiggins in “Dazed and Confused,” to a more assured adolescent. The actors’ natural interplay captures the prodding and barb-trading typical of young summer friendships. After being on the road with the duo, we understand them quite well: Microbe’s increasing impatience with being small and androgynous; Gasoline’s impish deflection of emotional attachment.

As the episodic travelogue rolls on, not every scenario takes wing. A second run-in with the hoodlums is contrived in a way that sits poorly with the rest of the movie. The sequence feels like a forced turning point; in a film otherwise characterized by rambling ease, it’s a jarring transition.

Crucially, Gondry’s relaxed aesthetic approach creates a framework in which the two leads can be loose. There’s no falling back on elaborate shots or effects. Any audience knows the road-trip movie and coming-of-age conceits well, and the director makes no attempt to reshape the structure. He trusts the actors and material to do the work. Which is not to say “Microbe & Gasoline” feels generic or bland: it communicates a very specific sense of place and culture, often in a way that seems effortless.

Additionally, while Gondry has explained that “Microbe & Gasoline” is drawn heavily from his own experience, there’s little sense that he is shoehorning the characters into a framework based exclusively on his own memories. Microbe may reflect who the young Michel Gondry was — or how he saw himself, at any rate — but he never appears to be pantomiming details of the director’s personality.

Shorn of the visual flourishes and digressions of past films, “Microbe & Gasoline” is among Michel Gondry‘s most direct and representative creations. It sidesteps saccharine wistfulness to flow without pretense, consistently putting its finely-drawn characters before other concerns. It’s not unusual for coming-of-age films to fall into the trap of longing for days past rather than observing and understanding them. Here Gondry shows that he understands the transformations that take place during long months of youthful summer, without attempting to convince us that those were the best days.