In the trailer for Mike Epps’ new Netflix stand-up special, the comedian jokes that COVID vaccines would be a lot more appealing if they were marketed — and flavored — like drinks.

“The best way to get n—s to take their shots is put it in flavors,” he says in the trailer, which dropped Thursday. “The pineapple Moderna? Watermelon Pfizer? Dude, they got the mango one coming out next month.”

His third Netflix stand-up offering, “Mike Epps: Indiana Mike,” premieres globally on March 29. The hour-long special was filmed at the Walker Theatre in the comedian’s hometown of Indianapolis, Indiana, with an audience that includes the city’s mayor, the Indiana Pacers, and his criminal lawyer of 30 years. 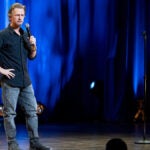