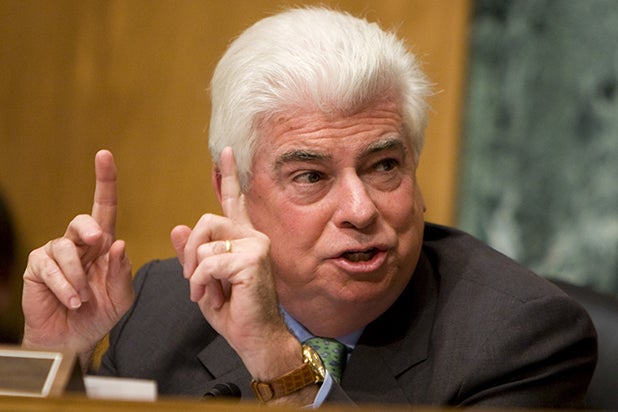 The MPAA’s rating is in on the U.S. Copyright Office — and it is not approved for all audiences.

Former U.S. Senator and current Motion Picture Association of America (MPAA) CEO Chris Dodd issued the House Judiciary Committee a letter on Thursday imploring modernization of the Copyright Office, which is currently under review by a congressional committee.

The longterm politician echoed the sentiments of separate lobbying group the Internet Association, which would also like to see the office, housed within the Library of Congress, brought into the 21st century.

“The core copyright industries — those primarily engaged in creating, producing, distributing and exhibiting copyrighted works — now contribute more than $1 trillion to the country’s GDP, represent 6.7 percent of the U.S. economy, and are responsible for 5.5 million jobs,” Dodd said in laying out the fiscal importance of the issue.

As a result of that sheer size owing to recent growth, Dodd sees too heavy a demand on the Copyright Office in its current state. He asked for the implementation of “better tools” as well as a “more autonomous voice” resulting from the current reassessment.

That said, Dodd’s MPAA — and the Internet Association — are pretty pleased with the Copyright Act itself as it sits on the books.

“The Copyright Act, although not flawless, generally works as intended to promote the production and dissemination of creative works,” he penned. “It enables audiences, creators and distributors to enter into a variety of relationships in the free market as technology and consumer expectations change.”

But no rule or law has been able to successfully stop piracy, which is a real problem in the eyes of both the MPAA and the Internet Association, though the two disagree on the penalties that should be assessed violators.

“What we need right now is not necessarily changes in the video-related provisions of domestic copyright law, but collaboration among government, the private sector, civil society and the public to make sure we have a stable and secure Internet that promotes healthy creativity, commerce and discourse online,” Dodd insisted.

He also pushed for Congress to approve intellectual property language in the bipartisan trade promotion authority bills, laying the groundwork for international universality.

The Internet Association sent you a letter today recommending that the Committee prioritize Copyright Office modernization in its current copyright review.

Creators, copyright holders, and the public would benefit from a 21st century Copyright Office, as Register Pallante and a number of Members of Congress said at today’s hearing entitled: “The Register’s Perspective on Copyright Review.” The Copyright Office administers aspects of the copyright law and helps guide policy on both the domestic and international stage. The Office currently resides in the Library of Congress, and various Librarians of Congress, including Dr. Billington, have been good stewards over the years. But the core copyright industries–those primarily engaged in creating, producing, distributing, and exhibiting copyrighted works–now contribute more than $1 trillion to the country’s GDP, represent 6.7 percent of the U.S. economy, and are responsible for 5.5 million jobs, according to a recent study by the International Intellectual Property Alliance. The growth of copyright as a large driver of our nation’s cultural and economic prosperity, paired with the rise of the digital economy, means that the demands on the Copyright Office are increasing in both complexity and importance, as we have conveyed in written submissions for prior hearings in this review. Giving the Copyright Office better tools and a more autonomous voice would put it in a better position to rise to the challenge, would be a valuable achievement worthy of this Committee’s copyright review, and could help address many of the issues these hearings have raised. Like the Internet Association, we continue to examine how best to accomplish those goals.

We also echo the sentiment expressed by the Internet Association that the Copyright Act, although not flawless, generally works as intended to promote the production and dissemination of creative works. It enables audiences, creators, and distributors to enter into a variety of relationships in the free market as technology and consumer expectations change. Indeed, in our own industry, it has produced an environment:

And as the Internet Association states in its letter, we believe that the unauthorized distribution over the Internet of digital copies of creative works remains a problem. The digital age has certainly been a boon, but it is also enabling criminal enterprises to steal valuable data–whether personally identifiable information, trade secrets, or content–at an alarming rate. The Internet has been a tremendous resource for creativity, communication, and commerce. And much of its success is attributable to its decentralized nature. Anyone can contribute to its content and architecture. But that also means no one entity can address issues when they arise. As the Internet Association letter puts it: “[n]o one set of ‘players’ is capable of (or should be responsible for) solving it alone. Rather, curbing this conduct requires the cooperation of many actors.” What we need right now is not necessarily changes in the video-related provisions of domestic copyright law, but collaboration among government, the private sector, civil society, and the public to make sure we have a stable and secure Internet that promotes healthy creativity, commerce, and discourse online. Everyone could be doing more, including content creators, search providers, ISPs, payment processors, advertising networks, and Internet registries and registrars. Their increased engagement, combined with vigilant enforcement of current U.S. law, will help continue our nation on a road to success at home. As for efforts abroad, Congress should approve the intellectual property language in the bipartisan trade promotion authority bills reported out of the House Ways and Means and Senate Finance committees. We agree with the Internet Association that copyright law must be balanced, and this language will begin to bring the right balance in countries that do not currently have the same level of respect for intellectual property. It will enable our members to create and bring entertainment to consumers around the world, to bring the benefits of that trade back home, and to help grow the creative industries in the countries of our trading partners.

Most stakeholders have a favored tweak they might make in U.S. copyright law if they held the pen unilaterally. Copyright Office modernization, however, is one of only a few that appears to enjoy consensus support. Music licensing may be another, but that is an issue for others to raise in the first instance. Overall, our wish list may differ a bit from the Internet Association’s. We, for example, believe that the current statutory damages provisions are reasonable, and that criticisms are both anecdotal and greatly exaggerated. The availability of statutory damages promotes investment in the creation and dissemination of works by giving artists, copyright holders, and licensed distributors–as well as developers of legitimate services, devices, and applications to access that content–a measure of security that others will not be able to free ride on their efforts without consequence. They compensate copyright holders for infringement when actual damages are difficult or impossible to calculate. In many cases, especially online, the fact of harm–even massive harm–is certain, but the number of times a creative work has been illegally uploaded, downloaded, or streamed, and the amount of harm caused copyright owners, is not knowable. Because statutory damages serve these societal goals, the First Congress included them in the first U.S. copyright statute in 1790, and courts have consistently found them to be in the public interest. Moreover, adjusted for inflation, the current ranges are significantly lower than they were when the Copyright Act was last re-written in 1976. There is no epidemic of juries awarding outsized statutory damages. Guided by the law and the judge’s instructions, juries award statutory damages in appropriate amounts, taking into consideration the circumstances of the case. Large damage awards are the exception, not the rule. Juries can assess as little as a few hundred dollars. When someone is assessed significant penalties, it’s because a jury of his or her peers has found significant wrongdoing. The historically unparalleled innovation over the past two decades, together with the proliferation of legitimate online distribution options that give consumers unprecedented choice in accessing their favorite content, demonstrates that statutory damages have not had a negative effect on those businesses that respect others’ rights and play by the rules.

While we disagree with the Internet Association on some issues, we are pleased that we have both come to the conclusion that Copyright Office modernization should be the Committee’s priority at this point. We look forward to continuing that conversation and, like the Internet Association did with its letter, kindly ask that you include a copy of this letter in the record of today’s hearing.