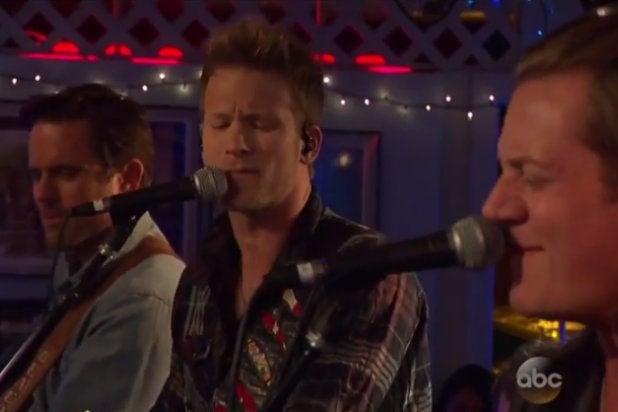 “Nashville” is a show about country music and authenticity, and they couldn’t get more authentic than live music. In a television first, the scripted drama included three live musical performances interspersed throughout the broadcast.

The performers, which included guest stars Florida Georgia Line, each performed twice for both the east coast and west coast feeds of the ABC drama.

All in all, things went smoothly on both coasts, with the performances almost seamlessly blended into the pre-taped dramatic elements of the show. While the performers were live, camera cuts to other characters and events weren’t.

Also read: Derek Hough of ‘Dancing With the Stars’ Fame Will Join ‘Nashville’

Still, it was an impressive technical feat. With the first two performances, the live music became the score overlaying the next dramatic scene. And aside from some sound issues with the volume of the music in relation to the dialogue of the scripted scenes, it was executed very well.

Had ABC not touted the live performances, audiences might have been duped into believing the entire episode was pre-taped.

The first two performances came from characters on the show, though not the principal leads Connie Britton and Hayden Panettiere. Instead, Chris Carmack performed “If It’s Love” as his character Will Lexington.

Later, Chip Esten performed as Deacon Claybourne singing “I Know How to Love You Now.” After the commercial break, Esten stayed on guitar while Florida Georgia Line closed out the show with a live version of their hit single “Dirt.”

Check out all six live performances below.

The East Coast feed of Carmack’s performance of “If It’s Love” is immediately followed by the West Coast feed.

The East Coast feed of Chip Esten’s “I Know How to Love You Now” is immediately followed by the West Coast feed.