A music biopic called “Shout It Out Loud” about legendary rock band KISS is in the works, and Netflix is nearing a deal to acquire the film package, an individual with knowledge of the project told TheWrap.

Joachim Rønning, the Norwegian director behind “Kon-Tiki,” “Pirates of the Caribbean: Dead Men Tell No Tales” and “Maleficent: Mistress of Evil,” will direct the film. KISS’ Gene Simmons and Paul Stanley will collaborate on the project, which spans the band’s story on stage and off. Ole Sanders wrote the latest draft of the script, with a previous draft coming from W. Blake Harron.

Netflix had no comment. A rep for the band said there are ongoing conversations with Netflix but no agreement has been signed. 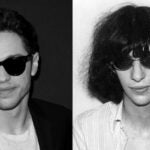 Also Read:
Pete Davidson to Star in Rock Biopic ‘I Slept With Joey Ramone’ for Netflix and STXfilms

The film is expected to be fast-tracked to coincide with KISS’ “End of the Road,” the band’s final tour that will pick up around the world in 2021.

KISS was founded in the early ’70s by bassist and vocalist Simmons and guitarist and vocalist Stanley, who recruited drummer Peter Criss and guitarist Ace Frehley. Wanting to break out from some of the garish hair bands of the day, they donned elaborate and flamboyant black outfits, white face paint and devilish tongues that helped them explode in popularity with a look that instantly became iconic for American teens.

Though KISS is known for songs like “Detroit Rock City” and “Rock ‘n’ Roll All Nite,” the band was most famous for its outrageous stage shows, complete with fire-breathing pyrotechnics, guitars that spit out smoke and drum kits that would levitate off the ground. Their live shows and music helped to craft the arena rock sounds for the next decade or more, and they remain one of the best-selling rock bands ever. KISS was inducted into the Rock and Roll Hall of Fame in 2014. 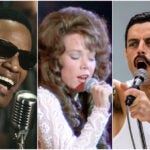 Also Read:
11 Highest-Grossing Music Biopics, From Tupac’s ‘All Eyez on Me’ to Elton John’s ‘Rocketman’ (Photos)

Rønning is represented by UTA and Brillstein Entertainment Partners.