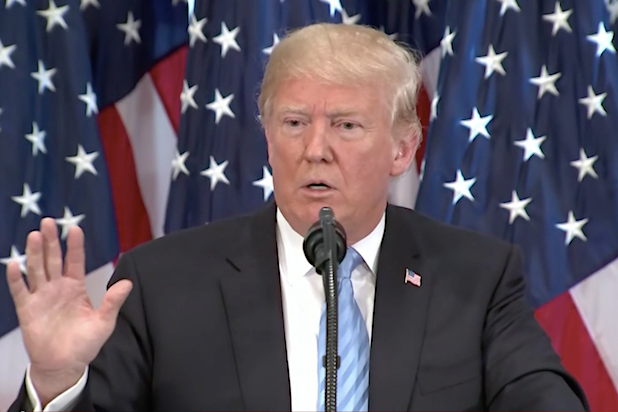 The major news networks differed sharply in how they covered Donald Trump address from the Oval Office on Tuesday to make a case for tough immigration laws and more than $5 billion in funding for a wall along the U.S.-Mexico border.

His remarks were carried live on Fox News, CNN, MSNBC, Fox Business, ABC, NBC, and CBS News. On Fox News, host Tucker Carlson kept it light with colleague Dana Perino, volleying between joking about recent news coverage and dispassionate assessments of what Trump might and might not say. On the other side of the ideological spectrum, MSNBC hosts Chris Hayes and Rachel Maddow were already pre-fact checking the president, offering corrections to claims they expected him to make and offered liberal-friendly speculation about how the shutdown might end.

Also Read: Sean Hannity Tells Trump to Continue Shutdown 'Straight Through the State of the Union'

The network was aided by sharply critical chyrons, which have become increasingly common among news outlets to combat what they say are President Trump’s falsehoods. CNN, per usual, attempted to chart a middle course with Anderson Cooper leading a panel of eight reflecting opinions on all sides.

ABC, NBC and CBS all cut into regularly scheduled primetime programming to air the address.

None of the networks attempted to fact check Trump in real time through the use of chyrons — a practice which both CNN and MSNBC have occasionally adopted during other public remarks from Trump in the past. Most lower thirds held static messages like “Trump Oval Office Address” or “Presidential Address to the Nation.”

The speech itself was brief, with Trump reading unemotionally from a teleprompter. No new points were offered and Trump didn’t ad lib. And contrary to speculation prior to the address, the president did not invoke emergency powers to build the wall without funding or congressional approval.

“There is a growing humanitarian and security crisis at our southern border,” Trump said. “We are out of space to hold them, and we have no way to promptly return them back home to their country… Among those hardest hit are African Americans and Hispanic Americans.”

“President Trump has chosen to hold hostage critical services for the health, safety and well-being of the American people and withhold the paychecks of 800,000 innocent workers across the nation – many of them veterans,” Pelosi said.

The post-game media wrap up fell among predictable partisan lines. On Fox News, Sean Hannity welcomed viewers to commentary offered by South Carolina Sen. Lindsey Graham and Fox News host Mark Levin. There was no particular emphasis on the factualness of Trump’s remarks.

“This is the most presidential I’ve seen President Trump,” Graham said. Levin — who dialed in by phone — lauded Trump as well and hailed the speech as a success.

Over at MSNBC, the mood was sharply the opposite.

“Mainly the president’s speech was a litany of scare stories about immigrants being terrible criminals coming into the United States to rape and murder Americans,” said Rachel Maddow, before welcoming Democratic Rep. Alexandria Ocasio-Cortez to offer her critique in an exclusive interview.

At CNN, the network turned to Daniel Dale, a Washington Correspondent for the Toronto Star — who has developed a following on Twitter for his fact checks of President Trump’s rallies. In recent months he has become a regular on CNN and is a favorite of “Reliable Sources” host Brian Stelter.

In his new primetime home, Chris Cuomo grilled Dale on a series of claims from Trump’s speech, to which the reporter did his best to check live on the air. Later on Cuomo and New York Times White House reporter Maggie Haberman dissected the speech on style with both agreeing the Oval Office address was not the optimal venue for Trump’s talents.

The non-cable channels, including ABC, NBC and CBS spent a little time on post-speech analysis before returning to their regularly scheduled programs.

Itay Hod contributed to this story