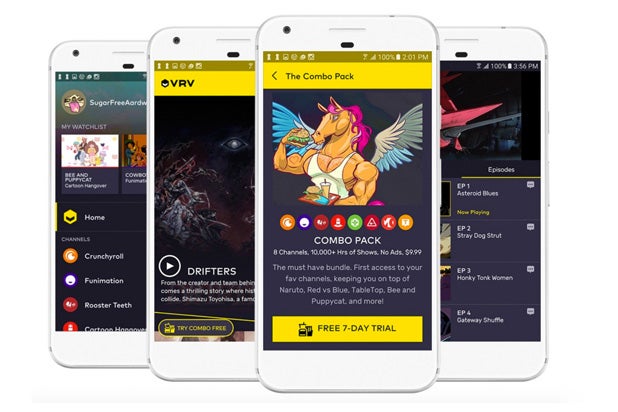 While Paramount’s “Ghost in the Shell” is bringing anime to the big screen, anime, animation and sci-fi-focused streaming service VRV — pronounced “verve” — is adding a bunch of new shows and the ability to watch on desktop computers as it builds a curated niche platform.

VRV, developed by Ellation, owned by AT&T-backed Otter Media, was announced last June at the E3 show in Los Angeles with content geared to fans of animation, anime, eSports, horror and other “geek” content. Its main product is essentially a “skinny bundle” for niche content that tends to appeal to anime fans. Anime-dedicated Crunchyroll, also owned by Ellation, is the largest niche streaming video on demand service in the market, and the company decided to create a larger platform that allows people to subscribe to other niche services on an a la carte basis, or get multiple channels as part of a $10/month combo pack.

“There’s an opportunity to create a value bundled offering,” Arlen Marmel, VRV’s general manager, told TheWrap. “Bundling has got a bad rap — traditional bundles have got a little too big. If you can appropriately craft a bundle, what you see is a really frictionless discovery system and benefit to all of our partners as we scale.”

Also Read: How Crunchyroll Turned a Niche Audience Into a Streaming Powerhouse

The additions include season 2 of “My Hero Academia,” which will be available on both the Crunchyroll and Funimation channels, allowing anime fans to watch it subtitled (on Crunchyroll) or dubbed (Funimation). Season 15 of popular gaming-focused series “Red vs. Blue” will be airing on the Rooster Teeth channel. VRV is also bringing on board fan favorites like season 2 of “Attack on Titan” and “Boruto: Naruto Next Generations.”

VRV subscribers can now also simulcast the first episodes of the anime spring lineup on its Crunchyroll channel — for free and ad-lite — which is typically only available to premium subscribers on Crunchyroll.

The company also launched a beta version of its desktop platform, creating yet another way to watch the service. It’s currently available on Android and iPhone, or PlayStation 4, Xbox One and Chromecast, with Roku coming soon.

And as luck would have it, VRV’s new initiatives come at what the company is calling sort of a golden age of anime. Not only are big Hollywood establishment players like Paramount (“Ghost in the Shell”) and Netflix (“Death Note”) adapting some of the genre’s best-known titles, but the current crop of new frontline shows — which air on TV in Japan — have raised anticipation to a level VRV execs say they haven’t seen.

“The level of these shows come around almost once a decade,” Ace St. Germain, VRV’s head of content and programming, told TheWrap. “It’s an unprecedented time for anime.”

July 4th Streaming Guide: What to Binge This Weekend (Photos)

From the new season of “Orange Is the New Black” to the “Back to the Future” trilogy, what to binge over the this holiday weekend