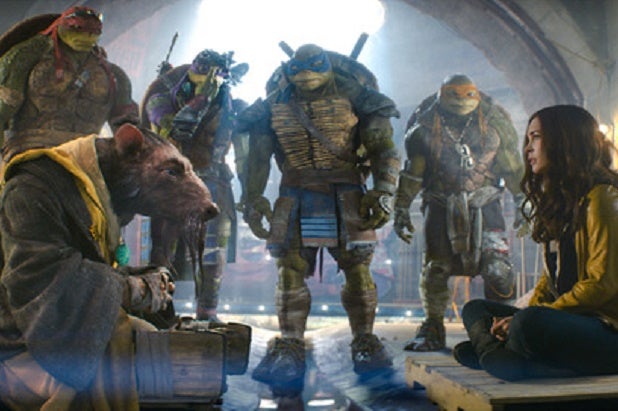 If they keep up that pace, they’ll easily knock “Guardians of the Galaxy” out of the top spot at the box office. And it will mark the second weekend in a row that the No. 1 film will blast well past the projections of analysts, who had the super turtle tale landing between $45 million and $50 million.

It will also be the second week in a row that the overall box office has topped the comparable frame last summer. The weekend was running roughly 10 percent ahead of the total of last year’s leaders, when “Elysium” and “We’re the Millers” battled for the top spot, but the summer is still off nearly 18 percent from last year’s record-breaking total.

Disney’s Marvel superhero space romp brought in $12.3 million Friday from a market-high 4,080 theaters and is looking at a $42 million second-week total. That would be around a 55 percent falloff from its $93 million opening last weekend, the best-ever in August. That’s a solid hold, in line with that of Marvel’s last three movies, but “Ninja Turtles” over-performed to make a blowout of what had been expected to be a close weekend race.

Warner Bros.’ “Into the Storm” did the best of the weekend’s three other wide openers on Friday with an estimated $6.4 million, which puts the twister tale on pace for a three-day total of roughly $18 million and third place. Women (58 percent) and moviegoers over the age of 25 (71 percent) made up most of the audience, which gave the found-footage thriller a “B” CinemaScore.

DreamWorks’s Helen Mirren foodie tale “The Hundred-Foot Journey,” produced by Steven Spielberg and Oprah Winfrey, took in $3.6 million for fourth on Friday and is looking at solid $11 million first weekend for distributor Disney. It received an “A” CinemaScore.

Summit’s latest dance extravaganza “Step Up All In” debuted with $2.8 million and is on course for a $6.7 million weekend. That put it in sixth, behind Universal’s Scarlett Johansson sci-fi saga “Lucy,” which took in $2.8 million Friday and is looking at a $9.2 million third week that would up its domestic total to $97 million.

It’s been 21 years since the last live-action “Turtles” movie, but Paramount plainly re-stoked interest in Michelangelo, Donatello, Raphael and Leonardo. The Jonathan Liebsman-directed PG-13-rated reboot got a lift from Michael Bay, whose Platinum Dunes’ produced the $125 million adventure tale along with the studio and Nickelodeon, where the “Ninja Turtles” are still a popular animated show.

The three-day total for “Ninja Turtles” is going to top the opening weekend hauls of the previous three live-action films combined. And it will be the second big score of the summer for Paramount and Bay, who teamed earlier on “Transformers: Age of Extinction,” the season’s biggest film domestically with $243 million and the only movie this year to hit the $1 billion mark at the worldwide box office.

Critics reviled the reptiles, but that didn’t matter to audiences at the 3,845 theaters showing “Ninja Turtles,” who gave it a “B” CinemaScore. The crowd skewed male (61 percent) and was that mix of young (45 percent under 25) and nostalgic older fans that the studio’s marketers targeted.

Paramount’s “Hercules” was running seventh and is on pace for a $6 million third week that would bring its domestic total to $64 million. Warner Bros. James Brown biopic “Get On Up,” Fox’s “Dawn of the Planet of the Apes” and Disney’s “Planes: Fire and Rescue” rounded out the top ten.

“Dawn of the Planet of the Apes” is bearing down on $200 million at the domestic box office, and more than $450 million worldwide.

CBS Films’ Daniel Radcliffe-Zoe Kazan romantic comedy “What If” brought in an estimated $49,380 from 20 theaters, a $2,469 per-screen average. It received an “A-” CinemaScore, in line with its strong reviews.