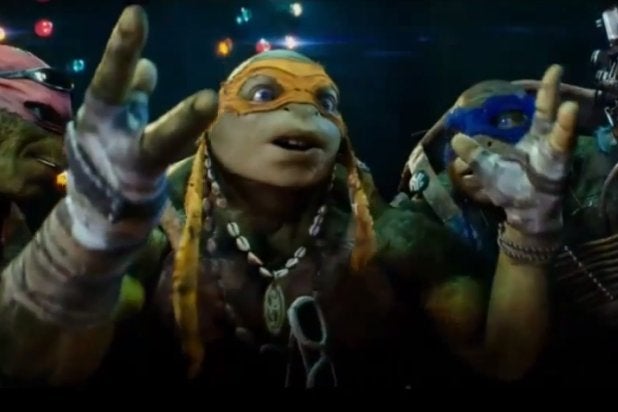 Kids will probably be begging their parents to shell out the cash required to watch “Teenage Mutant Ninja Turtles” this weekend, but critics are shelling it with bad reviews.

Luckily for everyone making money off of the $125 million production, kids don’t read reviews and they weren’t alive in the ’90s, either. So they’re likely to eat up whatever pizza Michaelangelo, Leonardo, Donatello, and Raphael are selling them through carefully placed (and apparently very obvious) product placement.

As for those who look back on the world’s most fearsome fighting team fondly, and their latest live-action incarnation skeptically, here are 10 brutal blurbs shredding the movie that you feared would be as bad as the critics say it is:

“‘Teenage Mutant Ninja Turtles’ is a movie that takes its characters and its premise seriously, until it doesn’t, and that operates at two speeds: tortoise (ponderous) and hare (head-spinning). Kids who love the characters and are jacked up on Orange Crush and Pizza Hut, both of which receive prominent placement in the film, may enjoy themselves, but some parents might find themselves rooting for Shredder and the endless array of Swiss Army Ginsu knives that pop out from his wrists every few minutes.”

“And if you thought Bay had forgiven Fox for saying he was ‘like Hitler,’ this new April O’Neil role is proof he hasn’t. It’s a setup. Audiences will ridicule her for stinking it up as an unconvincing journalist, but the script doesn’t give her a chance. Despite O’Neil piecing together Shredder’s scheme, the film insists she’s only there as a piece of ass. She is acknowledged zero times for her smarts and dozens of times for her looks, whether she’s derailing a car chase by accidentally distracting the driver (Will Arnett) with her butt, or enduring Michelangelo’s lusty pant that she’s ‘so hot I can feel my shell tightening.'”

“Is there a word that means the opposite of Cowabunga? If so, that’s the word for the charmless, dull and derivative new take on the ‘Teenage Mutant Ninja Turtles’… ‘Turtles’ has the tone-deaf sophomoric humor and chaotic action scenes most associated with Michael Bay, who produced it. Speaking of Bay, ‘Transformers’ fans may enjoy seeing Megan Fox re-surface, though she would have benefited from a few acting lessons since her last co-starring role in ‘Transformers.’ She’s no more convincingly authentic than the sewer-dwelling martial-arts-loving giant turtles in all their motion-capture awkwardness.”

“It’s difficult to tell what audience director Jonathan Liebesman and producer Michael Bay had in mind while bringing ‘Teenage Mutant Ninja Turtles’ back to the big screen. Is it the kids drawn to the hit animated Nickelodeon reboot or the middle-aged crowd looking to reconnect with yet another thing they loved in their youth? The filmmakers never came up with a resolution, which is why we have a reported $125 million effects parade with a crippling identity problem.”

“This is as generic as Hollywood gets. Motion-capture technology doesn’t make the turtles any more believable — that is, if you can see them through the murky cinematography — and when you find yourself aching for more scenes with bad-guy William Fichtner, there’s a serious problem. The film is for all those painfully postironic teenage boys who don’t want to ogle Megan Fox. Have a good time, sirs, whoever you are.”

“The litany of ear-splitting noise, explosions, fast-editing, and nonstop CGI are all Bay hallmarks. ‘Teenage Mutant Ninja Turtles’ doesn’t so much provide brainless enjoyment as it pummels the viewer into submission. ‘Shell-shocked’ is a reasonable description of the experience… For anyone unfamiliar with ‘Teenage Mutant Ninja Turtles’ or who prefers a coherent narrative, sitting through this will be uncomfortable and pointless. The only real advantage it has over the recent ‘Transformers: Age of Extinction’ is that it’s an hour shorter.”

“This reboot is the worst kind of cash grab. A studio saw a brand name they could exploit for name recognition and (fingers crossed) nostalgia, put together a script completely devoid of any kind of emotion or creativity, and is now hoping that you’ll ignore all of that because of CGI explosions and identifiable pop-culture characters. ‘Teenage Mutant Ninja Turtles’ is entirely hollow, poorly put together, and will require an audience on its level of stupidity to survive. Don’t be one of its supporters.”

“Jesus, this script was terrible. And so is everything else! The film is an agonizing experience, leavened only by the occasionally disorienting nature of the CGI rollercoaster scenes. This is one of those movies where there are a bunch of sequences where an untethered digital camera just swings and loops wildly around a bunch of digital characters as they slip and slide and digitally jump around with no regards for any concepts of the physical laws of nature or the cinematic laws of what makes for actually interesting action sequences.”

“The original movies were crude — Men in rubber suits? Come on! — and the concept engagingly absurd: Teenage. Mutant. Ninja. Turtles. Bizarre. But kind of fun. All the lightheartedness has been drained out of the technologically sophisticated reboot. If ever there was a movie that should not have been made, this is that movie.”