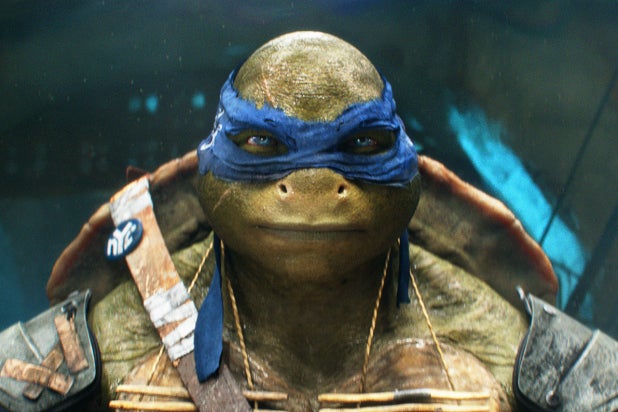 Say the words out loud. Slowly. Chew on them a little: “Teenage.” “Mutant.” “Ninja.” “Turtles.” They’ve been grouped together for so long that we forget the inherent absurdity of the tongue-in-cheek heroes first introduced by Kevin Eastman and Peter Laird in a shabby, jokey little black-and-white comic book.

That comic book, of course, became a publishing phenomenon (that spawned countless tired rip-offs), which begat a TV cartoon, which begat several big-screen adventures and more TV shows and another movie, which begat a full quarter-century presence in pop culture. Now Rafael, Leonardo, Donatello, and Michelangelo are back — along with their rat mentor Splinter and their evil nemeses The Shredder and his deadly Foot Clan — and I wish I could say this big-budget reboot was more fun than it actually is.

“Teenage Mutant Ninja Turtles” is a movie that takes its characters and its premise seriously, until it doesn’t, and that operates at two speeds: tortoise (ponderous) and hare (head-spinning). Kids who love the characters and are jacked up on Orange Crush and Pizza Hut, both of which receive prominent placement in the film, may enjoy themselves, but some parents might find themselves rooting for Shredder and the endless array of Swiss Army Ginsu knives that pop out from his wrists every few minutes.

We open on New York City besieged with the Foot Clan’s crime wave, and TV reporter April O’Neil (Megan Fox) attempting to break some actual news in the case so she can stop doing fluffball pieces about exercise trends. Despite the protests of her lovestruck comic-relief cameraman Vernon (Will Arnett), April goes running into a subway station that screaming people are fleeing, where she spots not only Foot-soldiers but also four shadowy figures fighting back.

They turn out to be our titular heroes, and in this telling, it turns out they were once April’s pets, part of an experiment being conducted by her scientist father alongside industry mogul Eric Sachs (William Fichtner). During the mysterious fire that cost her father his life, young April set the four turtles and a rat free in the sewers, where they grew up into bipedal mutant creatures who studied the ways of the ninja.

Sachs, who has pledged to support the NYPD in their battle against the Foot Clan, is thrilled to hear that the turtles are still alive, since their blood contains a mutagen that suddenly everyone, including Foot Clan leader Shredder, wants very, very badly.

The turtles’ personalities are well known to anyone who remembers their old TV theme song: Leonardo is the leader, Raphael has an attitude, Donatello is the techno-geek, and yes, Michelangelo remains a “party dude.” The voice performances are fine (including Johnny Knoxville and Tony Shalhoub, as Leonardo and Splinter, respectively), but the creatures themselves look like blobs of clay that got kilned at different temperatures. (These CG versions are barely any better, and occasionally even more off-putting, than the costume-puppet version created by Jim Henson for the original live-action movies.)

With a realistic talking raccoon and walking tree in the next multiplex, these turtles should look a lot better than they do.

While the director is Jonathan Liebesman (“Battle Los Angeles”), “Turtles” bears the stamp of producer Michael Bay, from an embarrassing performance by an Oscar winner (Whoopi Goldberg as April’s boss gets the honors) to a wildly incoherent action sequence (involving an 18-wheeler skidding down the snowy slopes of a mountain) to a climactic skyscraper battle that calls to mind the Chicago skirmishes of the last two “Transformers” movies. (Way to rain debris down on innocent bystanders in your kid movie, Mr. Bay.)

The turtles never pop enough as personalities to make the inevitable sequel seem appealing, although Fox deserves credit for one of her more solid performances. If the next movie follows April O’Neil into a new sewer to meet the Radioactive Adolescent Black-Belt Hamsters, that might be more of a draw.