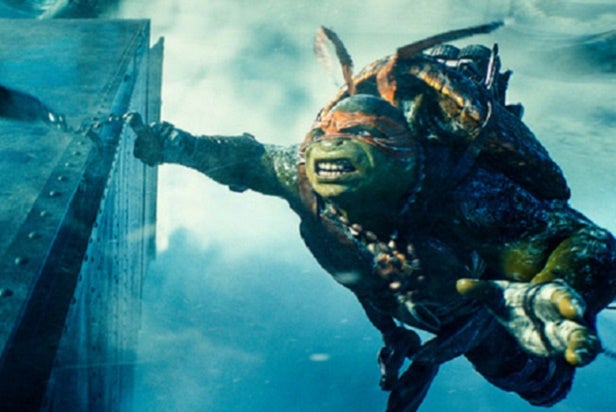 “Teenage Mutant Ninja Turtles” is a slight favorite to knock Disney and Marvel’s breakout space adventure “Guardians of the Galaxy” out of the top spot at the box office this weekend, in what could be one of summer’s closest popcorn smackdowns.

The kiddie crowd will lift Donatello, Raphael, Leonardo and Michelangelo narrowly past Quill, Drax, Gamora, Groot and Rocket Raccoon of “Guardians,” say the analysts, with both films likely to top $45 million for the weekend. That would be more good news for the struggling summer box office, which reversed a seven-week slump last weekend, but it’s still running about 18 percent behind last year.

There are three other wide openers: the found-footage tornado thriller “In the Storm,” the Helen Mirren foodie drama “The Hundred-Foot Journey” and dance romp “Step Up All In.” None of those are expected to threaten the leaders, however.

Word of mouth could play a major factor in determining who winds up on top, and that’s the best argument for “Guardians.”

Great reviews and strong word of mouth propelled it to an August-record $94 million debut last weekend, about $20 million above pre-release projections. Most of this summer’s No. 1 films have taken second-week drops in the 60 percent range, with the exception of the “Dawn of the Planet of the Apes,” which the critics loved. The reviews for “Guardians” have been just as strong, so a second-week drop like the 50 percent that “Apes” fell seems likely, which would put it at $47 million.

“Guardians” has been very impressive since its big opening weekend, posting the summer’s biggest hauls for a Monday ($11.7 million) and Tuesday ($11.9 million).

Paramount’s Michael Bay-produced “Teenage Mutant Ninja Turtles” is reboot of the film franchise that launched in 1990, when the wise-cracking reptilians were at their peak in popularity. Sequels in 1991 and 1993 didn’t come close to the $135 million domestic and $66 million from overseas that the original “Turtles” did, so this represents a gamble for Paramount.

The $130 million production budget ups the ante, and makes a strong overseas showing critical if “TMNT” is to turn a profit for Paramount, Bay’s Platinum Dunes and Nickelodeon Movies.

The popular kids TV show on Nickelodeon has helped the Turtles stay relevant with the young set, and the toy sales remain significant. There has been a dearth of family movies this summer, and the degree to which the PG-13-rated “Ninja Turtles” connects with kids will have a lot to do with its fortunes. The fact that “Guardians” skewed somewhat older — more than half its first-weekend audience was over 25 — could help there, too.

“Ninja Turtles” is tracking for an opening between $45 million and $50 million, and a late blitz of TV advertising could push it higher.

It was leading “Guardians” in advance sales at Fandango on Wednesday, and pacing ahead “G.I. Joe: Rise of the Cobra,” which opened to $54 million in 2009. It’s also surging on social media, with more than double the Facebook likes of “The LEGO Movie” and is just behind it on Twitter.

There are not a lot of reviews yet, but the ones that are posted haven’t been kind. If crowds at the Thursday night previews and on Friday are similarly underwhelmed, it could cut into the “Turtles” take. Lukewarm word of mouth might not matter to kiddies, but could make a difference with adults.

“Speaking as someone who grew up on the Turtles, I get the feeling there is a lot of curiosity among 20-somethings,” said BoxOffice.com assistant editor Shawn Robbins. “Whether it’s go-to-the-theater curious or wait-for-Redbox curious we’ll see, and word of mouth could affect that on Saturday and Sunday.” A scenario in which “Turtles” wins Friday and “Guardians” pulls ahead over the weekend wouldn’t be shocking.

“Teenage Mutant Ninja Turtles” will be in more than 3,700 locations, including about 350 Premium Large Format locations. “Guardians” will retain all of the IMAX theaters that delivered an August-record $11.7 million, or roughly 12 percent of the grosses, in its first weekend.

See video: ‘Into the Storm’ Trailer Threatens to Blow Audiences Away

The special effects are the star in “Into the Storm,” the tornado thriller from Warner Bros.’ New Line that follows a group of storm trackers, high school students and thrill-seekers facing an onslaught of twisters in their small town.

The studio would be happy with a $17 million opening weekend for the PG-13-rated “Storm,” which will be in more than 3,250 theaters.

Lasse Hallstrom (“Salmon Fishing in the Yemen”) directs DreamWorks and Participant Media’s “The Hundred-Foot Journey,” which features Mirren as the proprietress of a French restaurant dealing with an Indian family who opens their own eatery across the street. Om Puri, Manish Dayal and Charlotte Le Bon co-star. Steve Knight adapted it from the novel by Richard C. Morais.

The biggest names associated with the project are Steven Spielberg and Oprah Winfrey, who produced along with Juliet Blake. They bring prestige and Winfrey wields considerable promotional clout, as she proved last year with “Lee Daniels’ The Butler.” She hosted a Facebook chat for “Hundred-Foot Journey” on Monday.

“Journey” will skew toward older female audiences, who tend not to rush out on opening weekend, so $10 million would be an achievement for the PG-rated drama. Distributor Disney will have it in roughly 2,000 theaters.

“Step Up All In,” from Lionsgate’s Summit, is the fifth film in the dance franchise that has brought in more than $600 million at the global box office.

The domestic returns on the films have steadily declined since the original took in $65 million in 2006, but the overseas business has gone up even more. Both of the previous two “Step Up” movies — “3D” and “Revolution” — brought in more than $105 million from abroad.

“Step Up All In” has already opened in 26 foreign markets and has taken in $27.3 million from overseas.

Ryan Guzman, who starred in “Revolution,” returns for “All In,” which is directed by Trish Sie and co-stars Briana Evigan and Adam G. Sevani.