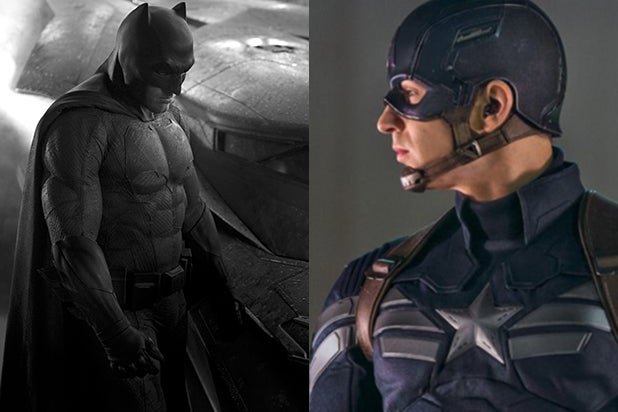 Just days after Marvel showed the strength of its brand with a $94 million haul for “Guardians of the Galaxy,” Warner Bros. has decided to release “Batman v Superman: Dawn of Justice” in 3D on March 25, 2016, avoiding a high-profile showdown with “Captain America 3” on May 6, 2016.

“Batman v Superman” is viewed as the cornerstone of Warner’s DC Comics Universe and the studio couldn’t afford to leave anything to chance with its release date. It was inevitable that one studio would blink, as it never made sense for Hollywood to open two blockbuster superhero movies against each other.

A Warner Bros. insider explained the decision thusly: “Not flinching – it’s a fantastic corridor for us.”

Indeed, March is becoming an increasingly popular month to release tentpoles, and “The Hunger Games” is just one example of a recent blockbuster movie that has opened in late March.

Another individual familiar with the studio’s thinking said that WB had the confidence to make such a move because Disney and Marvel have had success in creating new corridors for their comic book movies “Captain America: The Winter Soldier” (early April) and “Guardians of the Galaxy” (early August).

Warner Bros., also announced release dates for many other titles, including its entire DC Comics slate.

“Batman v Superman” has taken the release date of the Gerard Butler movie “Geostorm,” which now has an unspecified 2016 release date.

The DC movies that are expected to fill this ambitious pipeline include Zack Snyder‘s “Justice League,” standalone spinoffs for Gal Gadot’s Wonder Woman and Jason Momoa’s Aquaman, as well as a “Shazam/Black Adam” movie starring Dwayne “The Rock” Johnson and a “Sandman” movie that Joseph Gordon-Levitt is producing and may star in.

Meanwhile, Warner Bros. has traditionally seen November as a launch pad for its “Harry Potter” movies, and it’s possible that the two “event films” referenced below are sequels to J.K. Rowling‘s spinoff “Fantastic Beasts and Where to Find Them,” which WB will release on Nov. 18, 2016. Several months ago, the New York Times reported that Warner Bros. wanted to turn “Fantastic Beasts” into a trilogy of “megamovies.”