Real evil will always be a tantalizing go-to for storytellers, and in the case of notorious serial killer Ted Bundy, it’s meant at least nine at-bats across film and television for handsome, ambitious actors (from ‘80s-era heartthrob Mark Harmon to post-Disney Zac Efron) to twist looks, charisma and pathology into a portrait of chill, guy-next-door monstrosity.

Could Luke Kirby’s turn, as the death-row Bundy, be the best yet? Even if director Amber Sealey’s crisp, compelling indie docudrama “No Man of God” is the second Bundy film this year alone, not counting documentaries? Pardon the competitive shading to that question, but in the Hannibal Lecter era, screen madmen have mostly been muscle-flexing attempts at nerve-jangling one-upmanship, so it’s a comparison most films welcome.

And Bundy, convicted of murdering three women but certainly guilty of killing, raping and kidnapping countless more, has become a true-crime cottage industry, to the despair of many who’d love to see the death penalty applied to the very subject matter of his life and crimes. Nevertheless, when the star of sickness enters the frame in any story about psychos these days, we check ourselves for the ick factor that’s also, weirdly, a stylistic draw. 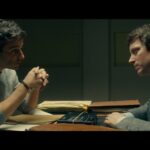 In Kirby’s case, however, as one-half of a prison-room two-hander told from the viewpoint of the man interviewing Bundy — young FBI agent Bill Hagmaier, played by Elijah Wood — what emerges from the Canadian-American actor’s air-thickening performance is a kind of dissipated, aged creepiness clinging to its last vestiges of power. (Does it help that Kirby also uncannily looks like the incarcerated Bundy from photos? Absolutely.)

Scripted by first-timer Kit Lesser, “No Man of God” is a dramatization of recordings Hagmaier made with Bundy beginning in 1985, when the latter was in a Florida prison scheduled for execution but still a cagey, media-savvy figure who hadn’t fully opened up yet about his crimes. With families waiting for closure, and the FBI ramping up the profiling arm of its new behavioral unit, an eager, bright-eyed Hagmaier is sent by his boss (Robert Patrick) to try and tame an elusive dragon into confessing to what was assumed to be many more murders than authorities had identified.

The arrogant, mentally armed Bundy tries to rattle Hagmaier into giving up his real intentions, while Hagmaier, under the guise of getting the killer’s help on other cases, calmly seeds a connection based on a little humility and just enough truthfulness. What starts as a chess match, however, becomes a strange, symbiotic intimacy that reveals the vulnerabilities in both men about self-control. With Bundy, it’s a ticking clock of mortality that makes him edgier and edgier as his appeals process goes nowhere, while Hagmaier is made to understand from Bundy that little separates an average guy like him from committing murder. Wood handles this unnerving realization well, being a less-is-more actor who’s always had faith in those glass-houses eyes of his.

Sealey leans into the “you could too” psychologizing haphazardly, but considering this is a woman directing a Ted Bundy movie, her perspective occasionally packs a righteous punch. Sealey will sometimes briefly linger on an unidentified woman in the periphery of a shot — in a car, on the sidewalk, in an office, along a hallway — as a potent reminder that typically lost in stories like these are the lives of everyday women who are now forgotten victims. 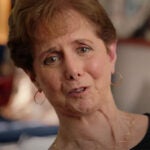 Her most resonant feminist visual aside is saved for a scene when opportunistic Christian firebrand James Dobson (Christian Clemenson, “Colony”) interviews Bundy for television. While two famous extremists perform a screed on the evils of pornography for their own ends, Sealey and cinematographer Karina Silva center the shot on a nearby female assistant (Hannah Jessup), disgust and fear — perhaps trauma? — slowly washing over her face like a realization of just who runs the world. It’s an invigorating, unsettling moment.

There’s also the curious case of Bundy’s appeals lawyer being a woman, and as played with workaday verve by Aleksa Palladino (“The Irishman”), she’s a satisfyingly dimensionalized figure of smarts, loneliness and exasperation. She can separate who Ted Bundy is from a fight against the death penalty, and she also knows how to shut down Hagmaier when he makes a patronizing, sexist comment about what she must be going through. (Her rejoinder is too good to spoil here.)

“No Man of God” may have been written by a man, but you can’t help feeling the reason this umpteenth examination of a modern devil works as well as it does is because, as a woman, Sealey knows where the exploitation traps are and avoids them by focusing on the people in her frame, their exchanges well-paced by editor Patrick Nelson Barnes. It lets Kirby give a magnetically subtle rendering of a quiet villain in edgy decline and allows Wood to embody the weight of someone seeking to understand a killer before the state pulls a switch that will make myriad questions about Ted Bundy unanswerable. Until, that is, the next filmmaker tries their hand.

“No Man of God” opens in US theaters and on demand August 27. 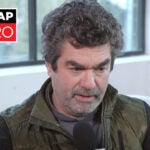